Cuala will host the return of the Dermot Earley Youth Leadership Initiative for Dublin South in September for 15-18 year years of age who are interested in developing their leadership skills and willing to commit to 20 evenings of workshops over the academic year.

Participants who successfully complete the 3 modules including a 20 hour voluntary community project will gain a Level 6 Certificate in Youth Leadership and Community Action.

The application date has been extended to July 14th.

Applications (which are open to all GAA clubs) should be made via https://www.gaa.ie/news/dermot-early-youth-leadership-initiative-applications-2019/ 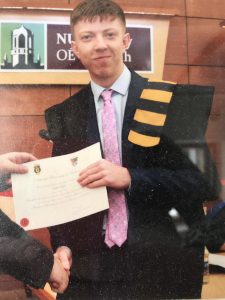 Personal account from Cuala’s Charlie Boyle
During the summer holidays in 2017 I saw a post on the Cuala website about The Dermot Earley Youth Leadership Initiative.
My Dad told me that Dermot Earley was a great footballer from Roscommon during the 1980s. He was also the commander and chief of the Irish armed forces. He died in 2010 at the age of 62 and his family decided to support a youth leadership initiative and lent his name to its title.
I decided to apply for the DEYLI and was thrilled when I got a letter at the end of August to say I had been accepted to take part.
A group of around 16 transition years mainly from Cuala took part in the course. We met on most Friday evenings in Scoil Lorcain during the year.
Cliodhna Kelly, Órla Mc Mahon and Kevin Spain were our tutors and we would all agree that they had a great influence on all of us.
We learned a lot about leadership but mainly we learned a lot about ourselves.
One of the highlights was when we all had to make a presentation to a room full of guests in McKee barracks in Rathmines. We were all really nervous about doing this but it was a personal challenge which we all took on,overcame and felt better about ourselves afterwards.
At the end of May we each had to submit a project based on what he had done over the year.
These projects were graded and thankfully I managed to get a reasonable grade and I was able to graduate in Galway in October.
That was another fantastic day when we along with hundreds of others graduated in caps and gowns in UCG.
The DEYLI was a great experience for me . It helped me develop as a person in a fun and challenging way. I have great memories of the DEYLI and made great friendships through it.
My advice to anyone who might be interested is to talk to any of the previous graduates.
They’ll all say the same thing.
Give it a go!
Charlie Boyle
04/07/2019/by Cionnait
https://cualagaa.ie/wp-content/uploads/Asset-2xxxhdpi-1-1030x202-1-300x59.png 0 0 Cionnait https://cualagaa.ie/wp-content/uploads/Asset-2xxxhdpi-1-1030x202-1-300x59.png Cionnait2019-07-04 16:15:172019-07-14 11:06:12Dermot Earley Youth Leadership 2019 application date extended
Advanced Coaching Camps 2019

Hurling for Dads and other Lads
Scroll to top