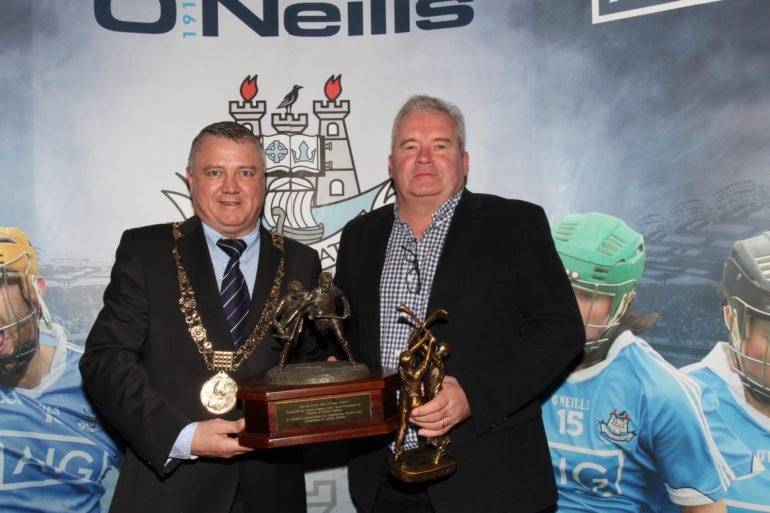 At a packed Red Cow Hotel on Friday night Cuala’s own Damian Byrne was named the Friends of Dublin Hurling Hall of Fame winner for 2016.

Nobody was more surprised than the man himself.

Dayo, born in Dun Laoghaire in 1961, is the 3rd of five sons born to Kathleen and Micheal Byrne, all of whom hurled with Cuala throughout the years.

Damian was always destined to be a hurler with Cuala as the connection was in the family going back to the original team of Dalkey Mitchells in the late 1800’s which included Dayo’s great grandfather, his grandfather and four granduncles.

At an early age Dayo began his hurling career with St Michaels CBS in Dun Laoghaire, winning the then premier schools competitions of Education and Herald Cups, but it was the keen eye of Kevin Kirwan of Cuala who spotted Dayo’s talent as a goalkeeper and of course this is how a lot of us know of Dayo. 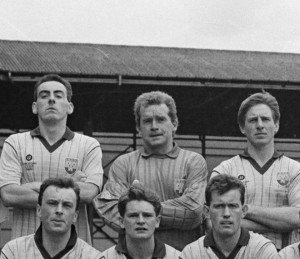 With Cuala, from juvenile to Senior and despite having one of the shortest puckouts in the country, Dayo excelled in goals, winning county leagues and championships which included 3 Senior C’Ship Titles, 2 Senior leagues, U21 league and 2 Junior C’Ships and it wasn’t long before the county’s no.1 jersey was handed to Dayo under Lar Foley’s and Jimmy Boggan’s tenures as Dublin Managers.

Dayo was a true servant of the Dublin Hurling cause during that period, holding the no.1 position for almost 8 years, awarded Man-of-the-Match in the 1991 Leinster Final against Kilkenny when he put in one of the most memorable goalkeeping performances seen in Croke Park.

Given that Dublin lost out to Kilkenny by the narrowest of margins that day and that the award went to a goalkeeper, is an indication of his superb performance that day (for which he was awarded a beautiful gold watch, which he happened to lose shortly afterwards and hasn’t been on time for anything since)

More recently, Dayo gave back some of his experience as a selector and coach with the County side alongside Tommy Naughton.

So while Dayo has had an illustrious playing career for both Cuala and Dublin, perhaps his greatest contribution to hurling and Dublin has been his tireless dedication to the promotion of the game to generations of young players throughout the South county Dublin hinterland of Blackrock to Shankill.

For over 25 years, Damien has worked closely with many schools in that locality, organising competitions, leagues and camps.

His patience and friendly understanding, endearing him to countless youngsters who went on to develop a love for hurling and football and who now themselves, actively contribute to their club at all levels.

Many of these youngsters who first learned the craft of hurling through Dayo have gone on to wear the Blue jersey of Dublin.

But Dayo’s work goes beyond just the promotion of hurling as a sport. He had the vision to establish, with others, the Cuala Academy, a model of how to encourage, not only the kids, but their parents to become involved in Gaelic Games and by doing so strengthen their own community bond. Through collaboration with local government agencies, Dayo piloted the successful “Sports Integration Project”, the aim of which is to divert youngsters away from anti-social behaviour, through participation and mentoring in Gaelic Games. In the late 1990’s, Dayo volunteered his time to work for 6 weeks in a Romanian Orphanage, where he met his to-be-wife Cyrena.

It is difficult to over-estimate Dayo’s contribution to hurling in the South Dublin region. His love of the game, his energy and above all his positive and caring approach, has made our great game accessible to so many young people who otherwise may not have had the opportunity to participate, and he has been, and still is, a great friend to them all. In fact the joke around Cuala is that all those kids now have the vote and if we ran Dayo in the next election, he’d romp home!…to quote Niall Scully in Tuesdays Herald…’Where others see a problem, Dayo sees a solution’….Never was an award so well deserved!

Big Thanks for All the Support Today
Scroll to top