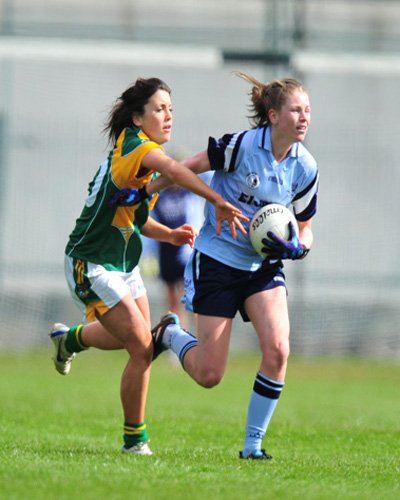 Elinor Doherty is Cuala’s latest All Ireland Medal winner having been part of the Dublin Minor Ladies Football Team that beat Tyrone 3-09 to 3-07 at the weekend. DUBLIN claimed the All-Ireland minor A ladies football title for the second time with a two-point victory against Tyrone at St Brendan’s Park, Birr, on Monday.
In a repeat of the 2008 decider between the two counties, the Sky Blues ran out victorious again but they had to withstand a late fightback from a spirited Tyrone to reclaim the title.
Dublin, beaten finalists in 2011, led by nine points – 3-8 to 1-5 – in the second half but a late brace of goals from Tyrone corner forward Teri McCusker brought the Red Hands roaring back into contention.
Tyrone lost the services of Emma-Louise Mulgrew to a sin-binning in the 46th minute but McCusker’s deadly double brought them right back into contention.
McCusker netted in the 49th minute and again with four minutes remaining to set up a grandstand finish.
Tyrone sub Michaela McGuigan reduced the deficit to two points in stoppage time but time ran out and Dublin were crowned champions for the second time in five seasons.
Dublin’s remarkable surge into a nine-point lead capped a 16-point turnaround as the junior Jackies found themselves 0-1 to 1-5 behind with 17 minutes played.
Mulgrew scored Tyrone’s goal in the eighth minute, fisting home from close range after McCusker’s shot on goal was partially blocked.
But Dublin would rally to lead by a single point at half-time – 2-3 to 1-5.
And it was a clinical double from Lauren Ebbs that inspired the turnaround as the left corner forward struck in the 22nd minute and again six minutes later.
Ebbs was on hand first of all to slot home after Emma McDonagh struck the woodwork before the Naomh Barróg star slotted coolly past Leah Lynch two minutes before the break.
Dublin stepped on the gas in the second half to motor clear as Tyrone went from the 17th minute of the first half until 15 minutes from time without registering a score.
During that period, Dublin hit 3-7 without reply to open up that matchwinning nine-point advantage. 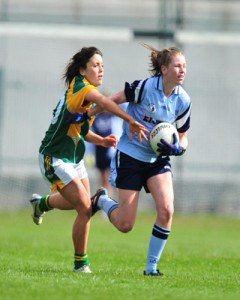 Tickets for All Ireland Semi Final
Scroll to top