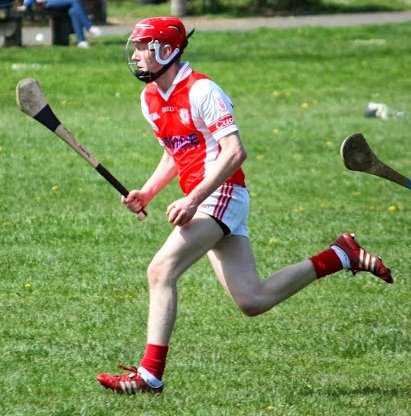 Two of the League’s giants butted heads in SilverPark on one of the year’s hottest days so far. Cuala’s victory throws them back to the top of the Table and maintains their unbeaten run in AHL 9. With four games left to play, Cuala are strong favourites to take the honours at the end of the year, but importantly, they have to play three of the contenders in their last few outings.

In the opening few minutes it was nip and tuck as the two contenders searched for weaknesses. Cuala led 0-2 to 0-1 with two fine points from youngster David Ryan and seasoned veteran Eoghan Dunne. Then on the eight minute the game exploded. Dunne stepped up to take a 20 metre free slightly to the right of the posts. There was only going to be one result, and with the net being ripped out of its fixings, Cuala got the break-through and were up by 1-2 to 0-1.

On the 20 minute-mark, Cuala were 2-04 to 0-04 ahead after Simon Cullen battled against three men on the edge of the small square. He danced around them all and still found the energy to bulge the roof of the net with a superb solo goal. Ogie Ryan and Dave Ryan chipped in with a point each and it looked as if Cuala would pull away, but Crokes kept in touch with two pointed frees.

Cuala were comfortable at this stage but for some reason could not shake off this dogged Crokes team. Cuala had all the possession but finding the target wasn’t easy. Suddenly from a comfortable position, Cuala were rocked back by a fluke goal. As things happen in Sport, it was now ‘game on’ as Crokes surged forward buoyed by the goal, and started to chip away at the Reds’ lead. Half score was 2-06 to 1-06 to Cuala. However Cuala kept their heads, and in the second period they pushed on relentlessly and took another 10 points while Crokes were limited to 4 points from frees.

This was a major win for the third team and propels them back to the top of the league whilst continuing their unbeaten run. Two new additions to the team, Brian & Daithí Murphy, added great pace and direct running to the team and quite simply Crokes could not cope with their pace. David Ryan is slowly but surely becoming a leader for the future and it was great to see a young lad barging forward and knocking bigger and more senior players out of his way. The full back line of Denis Monaghan, Colmán O’Drisceóil  and Eoghan Dalton were again as solid as oak-trees, and Canice Dowling excelled between the sticks. A plus for Cuala was the introduction of Ray Walsh who on three different occasions stopped Crokes’ attempts at goal at critical times during the game. Ray has just returned from a serious shoulder injury and put in a truly class performance. But ultimately, it was the forwards who won the day. The full-forward line of Dunne, Ryan and Cullen contributed 2-11 of the total, and that really says it all. Crokes got no change in the middle of the field where Alex Brock bossed the opposition with his strength and physicality. Conor Ennis, Dylan Kennedy and Ed Monaghan gave their counterparts the run-around all day and were unlucky not to register on the scoreboard.  Rory Doyle held the keys-to-the-castle at centre back and Oisín McCann put in a great days work on the wing.

Footnote: The only difficulty Cuala faced all day was deciding which of the 15 substitutes would get a run. Any of the 15 would grace any team, and credit must be given to the whole group for the support they gave to each other.