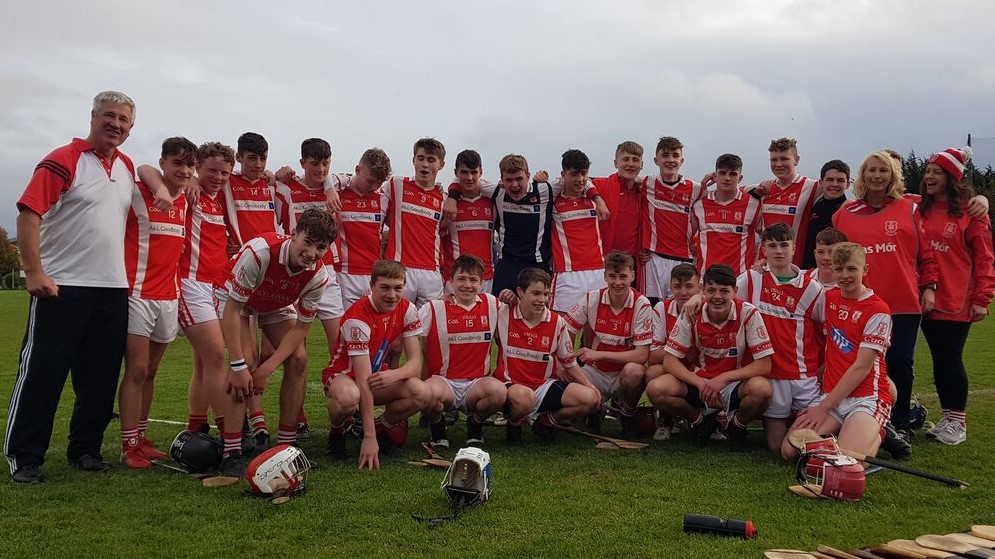 Another great day for Cuala!

16 teams started out on the journey, only one reached the destination.  That’s what Championship is about.

A huge team performance and four brilliantly taken goals were the difference between Cuala’s young guns and a gutsy Naomh Barróg team who never gave up. The wind was howling down the O’Toole Park pitch and Cuala grabbed that advantage in the first half. Malone, Mahon and O’Toole led the charge from the start. They hoovered up ball around the middle and opened up the Kilbarrack defence with clever passes and incisive running. Two brilliant saves from the Barróg net-minder off O’Toole and O’Braonáin and would keep the game in the melting pot early on, but the red wave was unstoppable as the game moved towards half time.

Hayes was unerring in his frees and scored a monster against the breeze in the second half. The half-back line trio of Tobin, Quinn and the outstanding Ryan, put sustained pressure on the Barróg defence and the few balls that got through were ably dealt with by Grant, O’Cofaigh-Byrne and the diminutive MacGiollaphádraig who seemed to always come out with the sliotar from the few rucks around the goalmouth.

O’Braonáin, Carey and Dunne buzzed around the full-forward line and caused misery for their defenders.  They would score 1-3 between them. Nugent had the difficult job of shadow-boxing Barróg’s excellent mid-fielder who was given no room to perform. After the break, four more lions were sprung from the bench and increased the intensity and pressure on the Northsider’s defence as tired legs began to give way. Barróg had a mountain to climb and fought desperately to regain the initiative.

But goals win matches. O’Braonáin hit the first after the break, then O’Dowd took one and made one for Quinn who stormed up from centre-back to finish a wonderful, flowing move down the right wing. At the presentation after the match, Conall O’Toole deservedly won the Man of the Match award from the County Board officials.

Footnote: Many thanks to the outstanding Cuala supporters who clapped every player off the field.

Also a huge thank you to the legend that is John Treacy who is completely selfless in the time & knowledge he has given to underage hurling in Cuala.