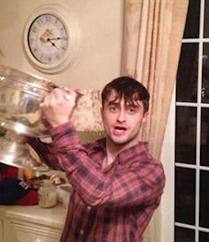 There were some  tall tales of magic, wizadry and heroic deeds emerging from last Sunday’s Minors victory over Meath in the All Ireland Final. And that was just the football!  Harry Potter himself was spotted too with a rather large goblet.  What is going on?

All for this week