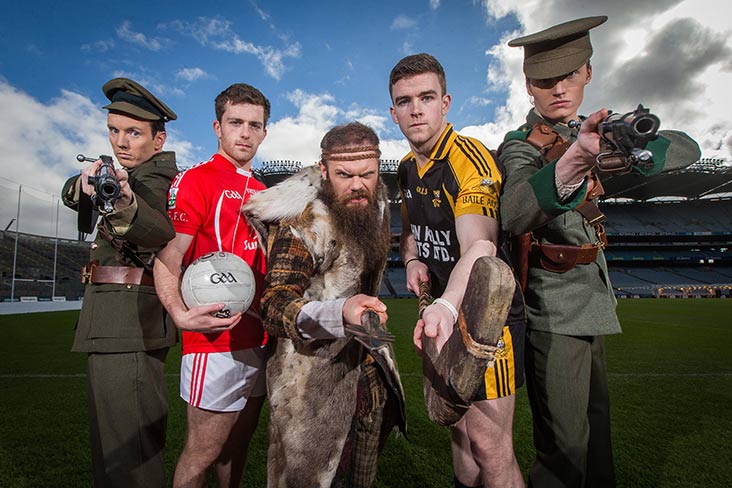 Tyrone Productions Ltd – a TV and Entertainment company, have been commissioned by the GAA to produce a half hour show, which will be their 1916 Commemoration event.  This historic event will take place in Croke Park on Sunday, 24th April 2016, the day of the Allianz League Division One and Two Football Finals. The event will be televised by TG4.

Working very closely with the show will commemorate 1916, the Proclamation, the story of Gaelic Games and the GAA’s role since 1916.    .

The show will incorporate large-scale innovative theatre, dance, song, poetry and pageantry that will rouse and move the audiences both in the stadium and the viewing TV Audience.

One important element of the event is a Grand Citizens Parade where we want to include representation from all sectors of Irish life.

As part of this Parade we want a very strong representation from as many GAA clubs in Ireland as possible to be there to carry the flag of their county on this historic day.     Our aim is to have at least 1,000 volunteers from GAA clubs right across the 32 counties represented.  So we are strongly asking for your support to help us achieve this.

Volunteers must be 18 years of age and over as we have children represented in other elements of the show.

It is important to note that volunteers may be required to be available on Saturday 23rd April for rehearsals in Croke Park or another Dublin based location and will need to be available for Sunday 24th April for rehearsals in the morning and for the event in the afternoon.    Volunteers will have to arrange their own travel and accommodation (if required) at their own expense.

Anybody interested in representing Cuala in the Grand Citizens Parade should contact Club Secretary Paddy Murdoch on 087 9196758 or email secretary.cuala.dublin@gaa.ie