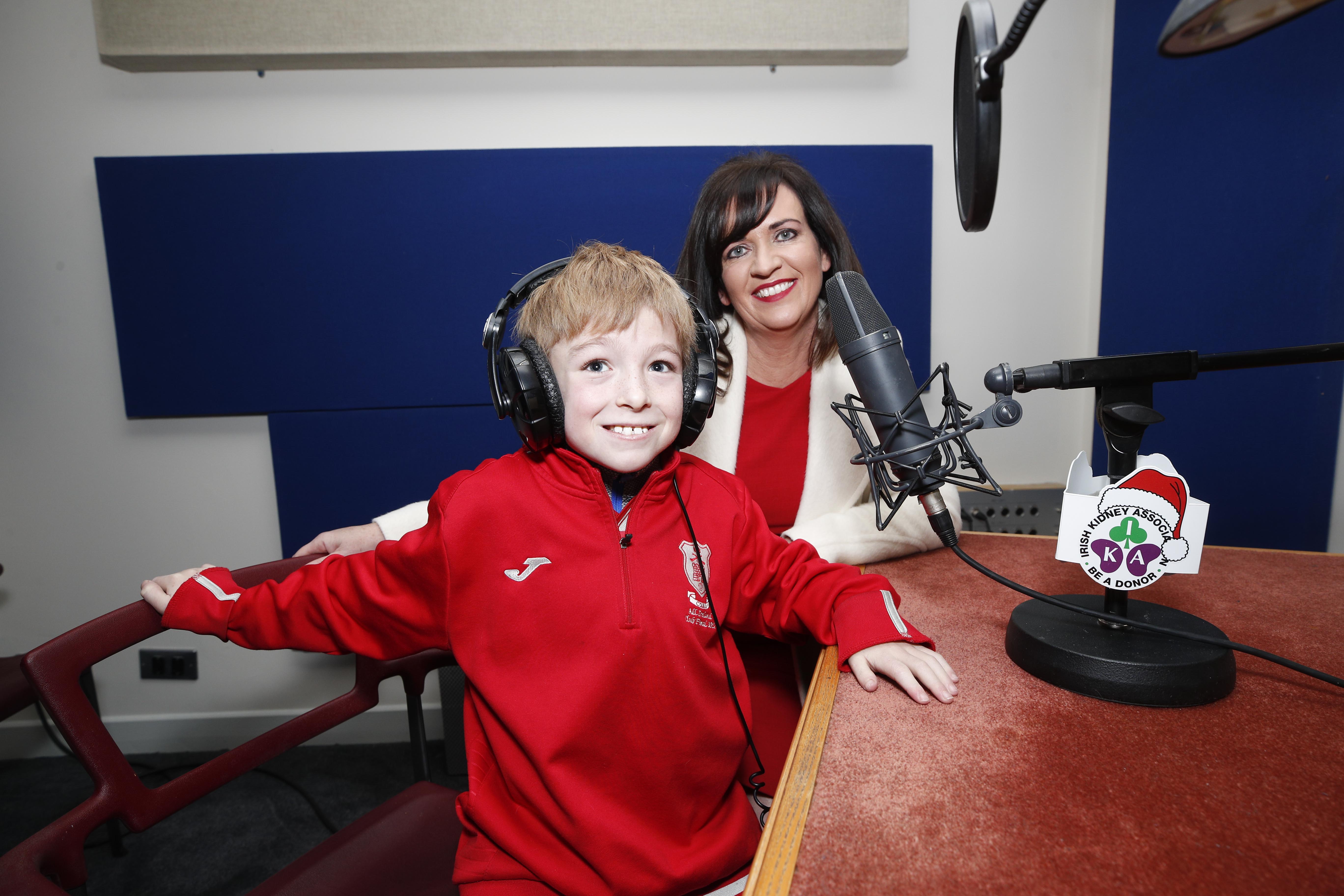 RTÉ’s News Anchor and Courts reporter Vivienne Traynor, a living kidney donor, stepped out with ten years old Luke Herlihy and his kidney donor father, Shane (today) to highlight an important awareness campaign, organised by the Irish Kidney Association, which encourages families to discuss organ donation as they gather for the festive season.

Earlier this year, Luke Herlihy, from Sandycove, Dublin received the ultimate gift from his father, Shane, the gift of life! Their living donor transplant operations took place on 6th April, during Organ Donor Awareness Week 2017, as one of Shane’s kidneys was removed at Beaumont Hospital and soon afterwards Luke underwent his life changing kidney transplant at Temple Street Hospital.

Ambassador for organ donation Vivienne Traynor said, “I was delighted to be invited by the Irish Kidney Association to support this campaign and to lend my voice for a radio advert which will run on national radio stations directly before and after Christmas Day.  As families gather for the festivities, Christmas offers an ideal opportunity for them to take the time to discuss organ donation and let their loved ones know their wishes. It is your next-of-kin who will make the decision in the event of your untimely death and that’s why the campaign’s message is all about encouraging families to #HAVE THE CHAT.” 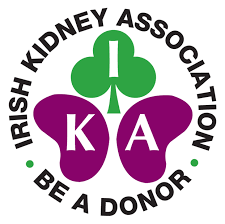 Vivienne continued, “Like myself, the Herlihy family has seen first-hand the benefit of organ donation and the huge transformation that transplantation brings. My nephew Martin benefitted from the ‘gift of life’ twice. In 2009, I donated a kidney to Martin and afterwards he could resume a normal life away from dialysis treatment, he could continue to work, and he became a father for the first time to son, Ted who is now four years old. A few years later, Martin’s kidney function began to fail again. Martin did not have to wait long before he was called for another transplant in 2014, this time from a deceased organ donor of a stranger family who made the selfless decision to donate their loved one’s organs at a time of great sadness. Since then, Martin and his partner Mary’s lives have become even busier as they now have two more beautiful children, daughters Daisy (2) and Billie (8 months)”.

“I would urge families to think about organ donation this Christmas, talk about it and let their wishes be known.”

Kidney donor father Shane Herlihy explained, “I am supporting the photocall to help raise awareness and encourage people to consider organ donation as it can be transformational for the recipients.  In my son Luke’s case, he never experienced normal kidney function as he was born with kidney failure and suffered complications that go along with it.  I was delighted and proud to have been able to proceed with the live donation, and am very grateful for the excellent care that Luke and I both received from the medical teams in Temple Street and Beaumont Hospitals.  Crumlin Children Hospital also deserve great credit as they not only saved Luke’s life in the critical early days but also brought him to the point where he was able to receive a kidney transplant”.

Shane commented, “Luke, has always been a lively outgoing child. Since his transplant he has much more energy and can focus more in school. He no longer has a restricted diet and has developed a voracious appetite. He is an avid sports enthusiast and has returned to playing Gaelic with his local club, Cuala GAA. He is counting down the days until Santa visits himself and his younger brothers when for the first time he can enjoy the same Christmas dinner as the rest of his family”.

In January Luke and Shane will travel to Anzere, Switzerland where Luke will take part in a ski camp which runs alongside the World Transplant Winter Games. Shane will also take part in a special event there for living donors. https://wtgf.org/wintergames/.

For organ donor cards Freetext DONOR to 50050 or visit website www.ika.ie/card  Your wishes to be an organ donor can also be included on the new format driving licence which is represented by Code 115. Organ Donor Cards are also available at pharmaciesnationwide. 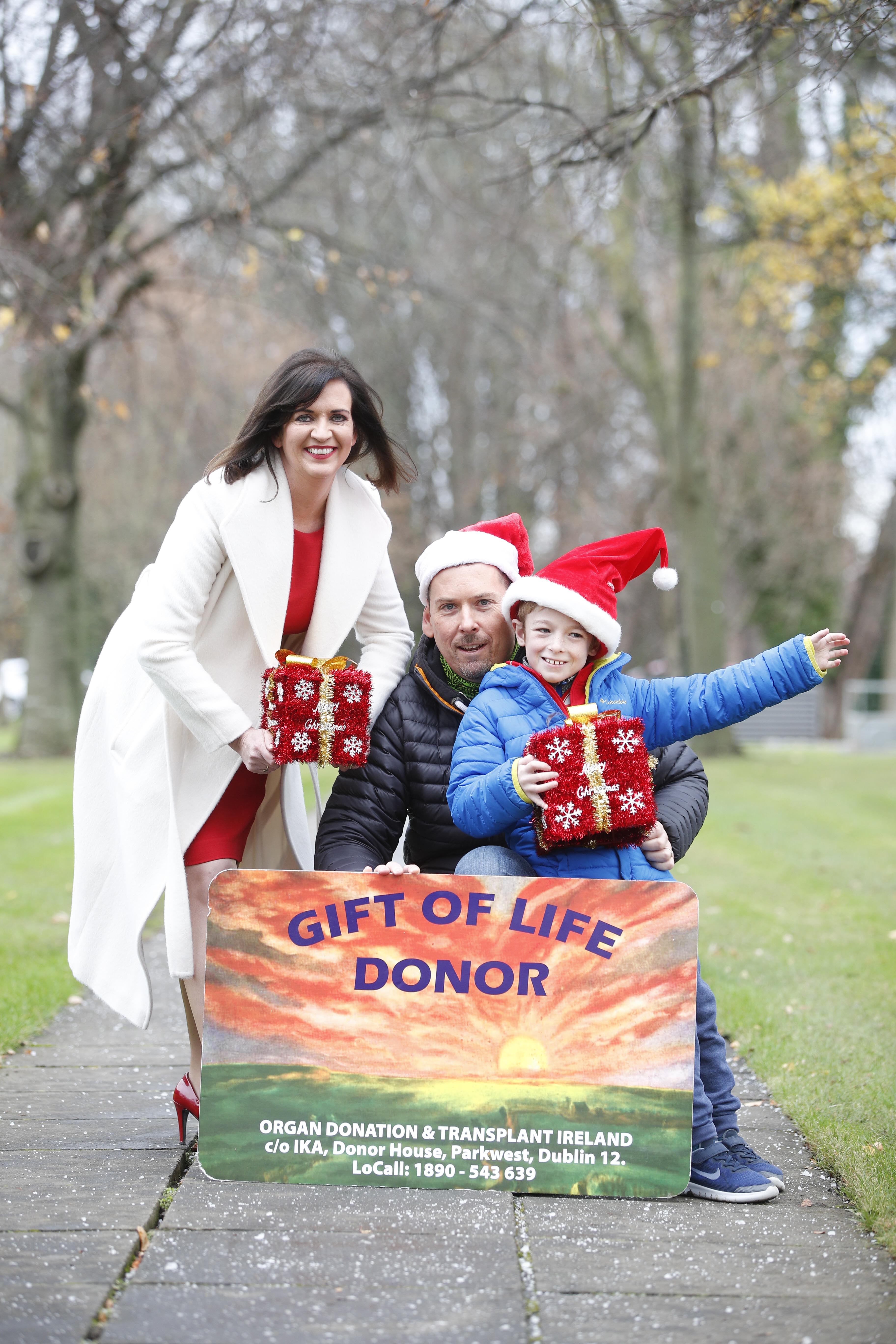 DUBLIN : 13/12/2017 : IKA CAMPAIGN URGES FAMILIES TO DISCUSS ‘THE GIFT OF LIFE’ AT CHRISTMAS. RTE’s Vivienne Traynor, a living kidney donor, stepped out at with kidney transplant recipient Luke Herlihy (age 10), from Sandycove, Dublin and his kidney donor father, Shane (today), at RTE Donnybrook, to highlight an awareness campaign, organised by the Irish Kidney Association, which encourages families to discuss organ donation as they gather for the festive season. The Irish Kidney Association is urging families to think about organ donation this Christmas, talk about it and let their wishes be known.#HAVE THE CHAT. As part of the campaign Vivienne Traynor provides the voiceover for a radio advert which will be broadcast on national radio stations directly before and after Christmas Day. For organ donor cards Freetext DONOR to 50050 or visit website www.ika.ie/card Your wishes to be an organ donor can also be included on the new format driving licence which is represented by Code 115.
MEDIA CONTACT : Gwen O’Donoghue, IKA Media co-ordinator. Mob. 353 86 8241447 Email: gwenodonoghue1@gmail.com