Cuala Stories is a series where we chat to members of the club from across our wider membership and get to know what makes Cuala special for them.

Next up is Natalie Greenan, whose path to the club came through the ICU unit in Holles Street… 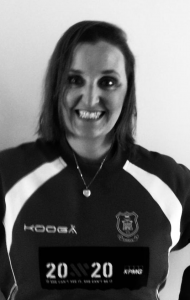 Like a lot of people, Cuala is a big part of my life.  I, however, had no background in the club or the game before I joined in recent years.

Destiny took over in the ICU in Holles Street where talks were in place to airlift our seriously ill daughter abroad.

A consultant on seeing from her file where we lived promised he’d have her playing in Cuala in no time.  That seemingly throw-away comment put us on the path to Cuala.

When my son joined in 2015 I stayed in the background, dropping him off and hanging around the sidelines.

It was only when my daughter joined two years later that I thought I’d better do my bit and volunteered to do the sign in at training.

I felt it was all I was qualified to do not really having much knowledge or understanding of the game.  Bit by bit I got drawn more into club life; I reluctantly joined the committee, happily organised the Christmas party and got talked into organising the Sponsored Walk.

This time last year I took part in the Oskars as the producer of Braveheart, very much outside my comfort zone but an experience I will treasure forever.

Over the few years I’ve been in Cuala my love for the game and club has grown.

The pace and excitement of the game sucked me in from the beginning, no doubt fed by Cuala’s coinciding success.  But it was the inclusiveness of the club and the community aspect of it that has kept me involved and committed.

Other clubs expressed surprise at how much access our kids have to senior players who have done several training sessions with the kids in the last year.

We’ve made a lot of friends in the club, both new parents like us and long-standing families who’ve been in the club for decades.  We even met that Doctor, who originally put Cuala in our mind, coaching there.

Some of the best memories we’ve made in recent years have been with Cuala friends and most of these memories are ones the whole family enjoyed together.

Cuala is a place where everyone is welcomed and I’d encourage anyone to throw themselves into Club life.  Like with anything in life, you get out what you put in.