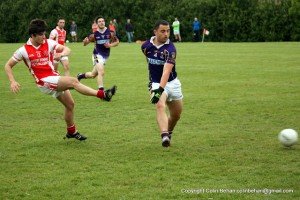 Wednesday evening in Dalkey saw a cracker between Cuala and Kilmacud Crokes in Division 2 of the Senior Football League.

Despite the incessant rain, a respectable crowd gathered for the arrival of our noisy neighbours. The City of Manchester Stadium this was not, but as the Cuala supporters gathered on the Embankment, there was a sense that a revolutionary red tide is in the offing. Crokes were chewed up all over the field both physically and mentally, as Cuala dominated from start to finish to relaunch the possibility of promotion to AFL1 by running out 9 point victors.

Cuala got off to a flying start with an expertly taken goal from Conor O’Brien. The youngster oozes class and used every inch of it to finish expertly from close range after swivelling around his man. Cuala were controlling the pace of the game but were struggling to translate their superiority to the scoreboard. They were aided however, by a fortuitous goal late in the second half that saw the ball slip through the legs of David Nestor, the Kilmacud goalkeeper. Add another couple of points and Cuala went in at the break 7 points up.
As usual this was a tempestuous affair, brimming with pride and passion. It was hard hitting, ugly and full of tension. Sprinkled with moments of magic, it was a hugely entertaining affair.

The zenith for Cuala came early in the second half when the intensity applied by their forwards through relentless pressure forced Crokes to just hoof the ball down the field and into the hands of the gracious Luke Treacy sitting unmarked at wing back. It was as symbolic as it was deserved. Crokes couldn’t get the ball out of defence, couldn’t hack the heat. It is not often that sentence can be said with a straight face, be they from Killarney or Stillorgan.

Cuala finished the job off after Ronan Sweeney, on for Donal Lehmann, caught a glorious pass from Luke Keating and powered to the net.

Ronan Murdock had an excellent game at corner back, acknowledgeable by the fact that he managed to kick the ball twice from open play. He did take a sideline late in the second half but the less said about it the better.

Luke Treacy was imperious at wing back and Fitzy’s darting runs up and down the field were an endless source of threat. Niall Carty, Ryan Scollard, John Sheanon and Conor O’Brien worked tirelessly up front as Cuala played with a fire in the belly and with an extra gear that many on the Embankment have not seen for a while.