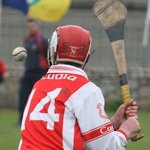 Conditions were perfect, a warm, dry afternoon with a light breeze blowing towards the dressing-room end. Cuala were missing a number of their ‘marquee’ players through injury but took the field with an eagerness and determination to see-off the Northsider challenge.

Cuala had a plan – crowd up the centre of the field and open up the space in front of the deadly inside line of McDonnell, Wylde and Myers. The Plunkets big midfielders ran the show in the drawn game a few weeks ago. Cuala had learned and prepared well. They set Thomas McCarthy and James Murphy the task of closing them down at every opportunity, and put Cathal O’Floinn at centre-forward to disrupt their centre-back. The half-forwards were to push up into the mid-field, close off the space in the middle and leave huge space in front of the inside line. The half-backs had to work tirelessly in defence.

Cuala started at lightning pace. Within a minute Mickie Wylde and Fionn Myers were using the space in front of them to great advantage and were creating all sorts of trouble for the men in maroon.  Stevie Mc was waiting for his usual chance to pounce. Within a minute Fionn O’Drisceoil had put over a ’65 following the first of a number of fine saves from the Plunket’s keeper. A few minutes later Emmet Murphy, who didn’t miss a free all day, clipped over the first of his fine tally of 1-5 after Myers was again up-ended by the clumsy Plunkets rear-guard. The Navan Road outfit responded with a ’65 of their own on 10 minutes but a well taken point from Cathal O’Floinn who was outstanding on the ’40, had Cuala in front by two.

The space enjoyed by the Cuala full-forwards eventually led to a goal. On 26 mins Wylde latched onto a long ball from Diarmait Mass, controlled it, took on his man and unleashed a ‘rasper’ goal-wards. The Northside goalie pulled off a good save but the sliothar deflected up into the air.  Stevie Mc came in from no-where and with his first touch of the day, found the back of the Plunket’s net. Cuala were now in cruise control and, despite the help of a strong breeze, Plunkets were struggling to get out of their own half. Ominously though just at half-time, Cuala took their foot off the pedal and the Northsiders took two points in quick succession leaving the score 1-3 to 0-5 at the break. Game on!

Cuala started the second half with more eagerness, were fighting strongly for every ball and attacked the Plunkets defence at every opportunity. Conceding frees was now the only way to stop the red-and-white onslaught! Murphy punished every misdemeanor and clipped over three frees in short succession. Mark O’Treasaigh kept his scoring average up and clipped over a fine long-range effort as the match entered the final quarter. Cuala were now 1-7 to 0-5 up; Plunkets hadn’t scored yet in the second period mainly because of the strength and determination of the red-and-white defenders.  Another Murphy free and a wonderful point from Myers, who showed all the agility of a gazelle, put the game almost out of reach. Plunkets were visibly wilting under the strain.

What followed was a wonder-goal from Murphy that will go down in the annals of Cuala hurling folk-lore! Latching onto a poor Plunket’s puck-out, Murphy stretched up to the limit to take down the ball. He controlled it with a grace that King Henry would have been proud of, out-flanked his marker and headed for goal. With 45m between him and the target, he still had a lot of work to do. A point would have been the easier option, but this clever player had ‘goal’ on his mind. He waltzed past two half-backs, jinked to the right and from a tight enough angle, drove a thunderbolt to the top left-hand corner of the net. The Plunkets keeper didn’t even see it!

Cuala were now in over-drive and when Fionn Myers clipped over his second, it was all over bar the shouting.  In the last five minutes Plunkets took 4 points to put respectability on the score-line but with ‘man-of-the-match’ Tiarnan Lane in the full-back line playing like a demon, there was little chance for the Northsiders to raise a red flag.

It was a wonderful display of passion, skill and clever hurling from the Dalkey men with the final score on 2-10 to 0-10.

Footnote: With two to play, Cuala are now placed third in the League on 15 points with the two teams above on 19 points. The irony is that Cuala have twice the score difference than second placed Lucan (89 points v 41 points) but unfortunately Cuala lost too many matches by the minimum and drew with Plunkets in the previous round!

Next up: St. Judes away on Saturday 6th October with the final league game against St. Sylvesters at home on Saturday 20th October.