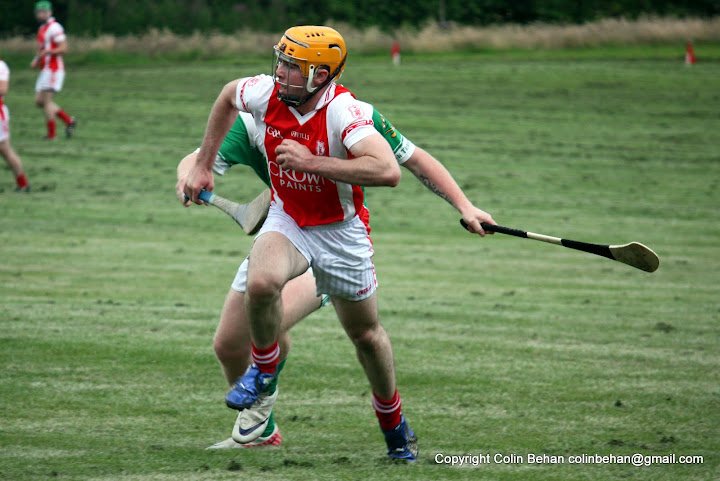 The weather was perfect: a light breeze blowing into the Castle-end, warm conditions, a dry sod on grass that had just been cut.  A large crowd gathered to see Cuala take on O’Tooles with both teams challenging for League honours. Despite having a dozen of their panel either injured or away, Cuala were out of the blocks faster and were quickly into their stride. Conor Gough took a pass from Shane Stapleton and intercepted an O’Toole’s short puck-out to register two fine points. Ger O’Meara, who seemed to have an ocean of space at wing-back, took a short puck-out from Brendan McLoughlin in nets and replied with a fine long-range point for the Larriers. Cuala were sharper and quicker to the ball early on and were dominant in most areas of the pitch, but they failed to transfer that dominance to the score-board! Their fitness levels, their off-the-ball running and their crisp, clever, incisive passing produced a lot of opportunities. Unfortunately, their forwards failed to capitalize. By the 20 minute mark, Cuala had squandered 8 relatively straight-forward point chances and one clear goal chance where Conor Gough and Brian Fitzgerald had combined cleverly to outstrip the Larrier’s defence. The Cuala supporters were beginning to wonder if the Reds would ever score, but Cian Waldron eventually settled the nerves by clipping over a lovely point from out on the right. Luke Keating and Brian Fitzgerald were frustrating the O’Toole’s backs and were winning frees. Barry Connolly converted three of these and Waldron, who worked tirelessly from the start, was rewarded with another fine solo point to leave the scores 0-7 to 0-3 at half time.

It was only a matter of time before Cuala’s pressure would lead to a goal and within 3 minutes of the re-start it duly arrived. A long ground clearance from Seán Barron, who was dominant at right half back, went straight to the hand of Connolly who hit a low ball into the path of Keating on the 21m line. In a flash Keating had taken possession and transferred to Fitzgerald who was bearing down on goal. Breezer, showing deft touch and good slight of hand, coolly slotted a low ball past the helpless O’Loughlin into the Northsiders net. In a blink of an eye, the game had turned and Cuala were ahead 1-9 to 0-4.  O’Toole’s response was swift. A quick puck-out to Michael Carton was delivered long and was deflected off the full-back line. The Larrier no.14 raced clear to try to gain possession in front of goal.  Adam Hudson came across from the right and it was his pace that prevented what looked like a certain goal for the Greens. In fact both Simon Timlin and Hudson were acting as effective sweepers behind Shane Kiely who showed great defensive skill particularly when operating on the 40.

By the middle of the second period, Cuala’s superior fitness was beginning to tell and they were very dominant in the ’diamond’ at mid-field. Browne & Stapleton were providing the ‘engine’ in the middle and brothers Oisin & Conor Gough were hovering up most of the possession on both ‘40s. Browne was involved in everything. He linked the play very well for Cuala and bravely broke up attacks and pressurized the O’Toole’s players into turn-overs. Gough was having an inspired game at no. 6 and time after time caught ball under pressure and delivered sensibly into his forwards.  He grew in stature as the game progressed and, with the help of Barron and Holden on his flanks, effectively closed the door on any resurgence from the Larriers. With ten minutes remaining, following good work from Holden & Connolly, he added a huge long-range point. When Browne added another, Cuala were 9 points ahead and even the most optimistic visitor knew it was over as a contest! In the closing minutes, Cuala eased up and O’Toole’s scored 5 points without reply mostly from the sticks of O’Meara and Carton. However, Cuala Minor Jack Phelan on his debut had the final say with a lovely point from 45m out on the left. The final score was 1-14 to 0-11.

This was the last game of the League for Cuala leaving them on top, but other results need to be favourable for them to contest for League honours. O’Toole’s still remain in the chase.

Best for O’Toole’s were Carton & Gettings around the middle and O’Meara & McLoughlin in defence. For Cuala the tireless Bobby Browne and the impressive Oisin Gough were excellent.

After-match comment: “Great to see that all the training has paid off” – Packie Holden!

Footnote: One notable aspect of the game was the movement of the Cuala half-forwards and the distance & precision of Fintan O’Brien’s puck-outs. Cuala’s forwards were finding a lot of space and winning clean possession as a result.