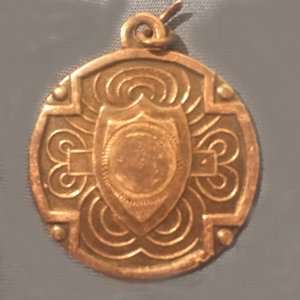 The Cuala Marian League was an informal juvenile structure covering South Dublin (Dun Laoghaire, Blackrock, Foxrock, Stillorgan) and North Wicklow (Bray, Enniskerry, Kilmacanogue etc) in the mid 50s and 60s. It gained official GAA recognition in 1960 when if came under formal control of the Leinster Council.

The “Cuala” name derived from the fact that their area of operations coincided with the ancient Gaelic territory of Cuala – roughly from The Sugarloaf to Dún Laoghaire. Players from Dun Laoghaire, Sallynoggin and Dalkey had been heavily involved in this League and when an exclusively boys club was set up in 1962 by Richard Curran, Tom Holden and others, it’s fitting that they adopted the name Cuala Boys. 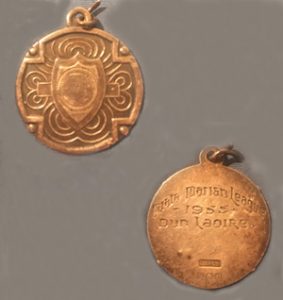 The “Marian” part of the name was influenced by the Catholic Church’s celebration of the “Marian Year” in 1954 when many parishes erected statues and shrines in veneration of the Virgin Mary. The league too was founded in ’54. Incidentally,  Many boys born in that year were given a middle name “Mary”, so it’s no surprise that their boys’ league, received the same attention.
Cartlann Digiteach Cuala was recently contacted on behalf of someone who found this medal outside a pub in a town in Co.Clare back in 1967 . As you’ll see, it related to the earliest period of the League and appears to have been awarded to Dun Laoire. We’re of the opinion that this is most likely St Michael’s Dun Laoghaire – a team closely associated with CBS Eblana who later played in nearby Sallynoggin (and had ‘form’ when it came to winning medals). They disbanded in about 1962 and many of  their  players joined Cuala Boys.
Does anyone have an opinion on this? More to the point, do you know anyone who played in the league in 1955? We’re estimating that those players would be in their mid-70s now. We’d love to hear more.