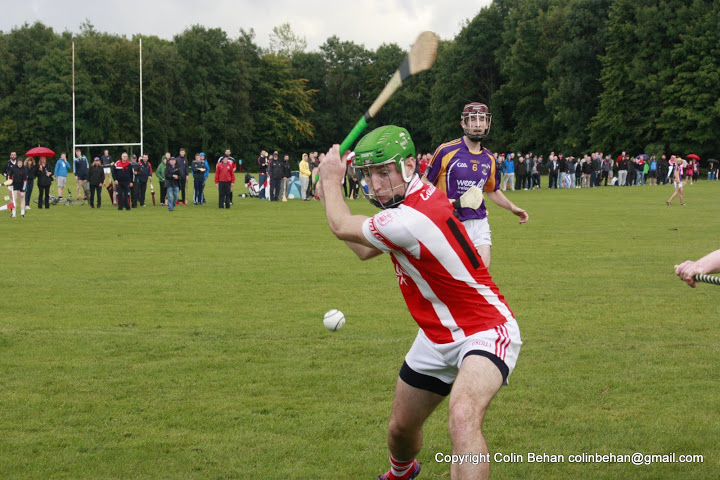 Last week, we were in two semi-finals and this week the Cuala Junior Hurlers are in 2 county finals.

Firstly the Junior As  faced Kilmacud Crokes on Saturday evening in Shanganah Park. A perfect summer’s evening for hurling and the game did not disappoint either. The game started at a hectic pace with Cuala playing into the Prison end. Cuala made most of the running in the early stages but the long ball from the Crokes net-minder , Sean Garvey,  was putting the ball deep into the Cuala territory. However, the Cuala half-back line of John Sheanon, Bobby Browne and Jack Phelan was exceptional and with Shane Murphy and Justin Byrne getting on a lot of ball at mid-field,  the Cuala forward line was receiving a lot of service. And they did not disappoint. Brian ‘Breezer’ Fitzgerald was in sparking form and after converting several early frees and having a goal-bound effort saved, he produced the move of the match, cracking in a goal from an almost impossible angle. Cuala were in front and never relinquished that lead.

Not that it was easy. Stephen ‘Butsie’ Butler made an incredible reflex save just before half-time to deny Declan Browne of Crokes what seemed a certain goal. The 2nd half resumed and Crokes were starting to show more resolve. Another goal bound shot was deflected onto the upright and Cuala got out of jail. Crokes finally got they goal they were looking for on the 36th minute and once again had the momentum. Two more points from Crokes meant there was a solitary point between the teams on the 50th minute. But then Con O’Callaghan and Jack Behan started to get on ball in the  full forward line,  and with Beanos sublime skills and O’Callaghans  athleticism , Crokes were struggling.  Naoise Waldron came on to score 4 dead-eyed, ice-in-the-veins, placed balls. Big Andy Murphy topped the evening with a well taken goal and the job was done.

Meanwhile on Sunday the Junior Fs had a great win over a strong Raheny side. A mix of youth and well, not-so-young Cuala side delivered a fine performance with outstanding contributions from Andy Power at centreback and Tiarnan lane in the middle of the park. Shane O’Brien operating in the full forward line was available for every ball and Cuala were well in charge. 3 late goals from Raheny rattled the nerves but the Cuala boys saw the job out and finished with  a scoreline of 2-15 to 3-9.

Final is against Clontarf on Sunday 13thAugust in O’Toole Park.

Cuala lads do us proud at Forristal tournament
Scroll to top