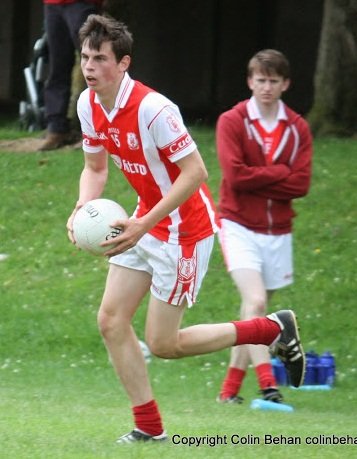 Cuala intermediate footballers got back to winning ways as they dealt efficiently with a tough tackling St Monica’s side in their AFL4 encounter in tricky conditions in Edenmore.

Playing against the wind in the first half, the team played intelligent, passing football which reaped rewards as the impressive Mark O’Grady kicked some good early scores. Conor O’Brien also got on the scoresheet as the Cuala lads kept up the intensity making it hard for the opposition to play their way out from the back. Some fine fielding by Andy Power, Jack Flynn and Ryan Scollard saw the team on top around midfield and with Donal Lane and Adam Hudson supplementing the attack intelligently, the traffic was mainly directed towards the Monica’s goal. However, the stiff breeze meant that Cuala’s dominance was not yet fully reflected on the scoreboard.

In defence, the Cuala fullback line of Neil O’Sullivan, Kevin Killion and Dave McMahon were proving resolute in dealing with the northsiders attacking threat. Whether beating their man to the ball or executing timely tackles to win possession, there looked to be little or no threat to Darragh O’Reilly’s goal and Monica’s had only two points scored by the 20th minute. However, a lapse of concentration saw a ball dropped, a Monica’s attacker take possession in a dangerous position and he duly slotted the ball home.

The Cuala response was terrific. A length of the field move involving almost half the team resulted in Mark O’Grady flicking the ball home from close range to ensure that the scoreboard at halftime bore at least some resemblance to the balance of play.

Against the wind, Cuala had dominated their own kickouts with Flynn, Power and the wing forwards Niall James and Cillian Sheanon showed prominently and they were found by O’Reilly with regularity as Cuala dominated possession. Half time saw a determination to continue that trend, keep up the intensity and start building a score. A few early wides raised some concerns that this might be ‘another one of those days’. However, with the backline continuing to stand firm, the forwards then got into a groove. Paul James found his shooting boots and kicked some delightful scores as the Monica’s backs struggled to contain the Cuala attackers with Ronan Sweeney, Niall James and Cillian Sheanon to the fore in winning possession and ensuring attacking continuity. Sheanon added a beauty from out near the touchline and with James tacking on scores as the Monica’s backs resorted to fouling in their efforts to keep the Cuala attack at bay, the boys in red finally had some breathing space on the scoreboard.

Monica’s never gave up and they continued to bring the fight to the boys in red. However, the Cuala boys met fire with fire and substitutes Colman McKenna, Darragh Twomey and Conor Bennett made significant contributions in this regard with Bennett also popping over the last point of the game as the Cuala ran out convincing winners in the end.

A great win and a strong team performance as the lads put their championship disappointment behind them. This week brings the trek out to Man O’ War to play a game postponed from earlier in the season. A similar display is required to deliver the win which will bring Cuala into the mix in this highly competitive division.