We first reported on the Cuala Hurlers of the 1920s back in 2011. Now Cartlann Digiteach Cuala has a good excuse to re-post because not only have we obtained a better image of the team but we’ve also built up a better picture of their activities including the earliest-ever Match Report of a Cuala team.

A word of caution, CDC believes the people named here are accurate but it’s possible some of the names may be mis-attributed. In any event this team is, without doubt, the earliest side that can show a direct link to members of the current club.

If you know the unknowns, we’d be delighted to hear from you. 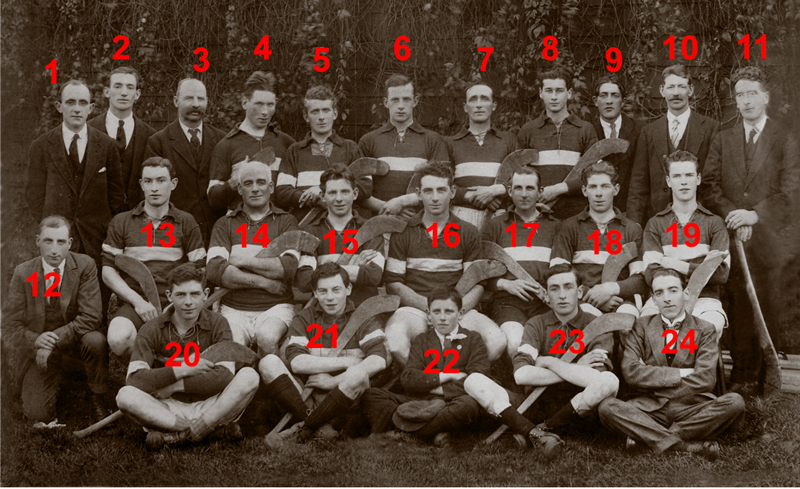 The Cuala Hurlers were active from at least 1920 when they played Junior Hurling under the auspices of the Dublin Board and lined out against clubs like Raperess,  College of Science and St Kevins.  In 1921, we have our first match report from when the Dalkey men travelled to Bray to play a friendly against St Cronins.

1922 saw them battling on and, in January at Croke Park, they played in the Junior League Final against Lucan Sarsfields. It wasn’t to be their day. Later that year, their league agenda saw fixtures against Conradh na Gaelige, Fontenoys, Fintan Lawlers and Confederates.  By 1923, they had become acquainted with St Dympnas, Kickhams, Young Emmetts and Rathmines.

Incidentally, all home games seems to have been fixed in the Phoenix Park but local intelligence is that training took place in a field at the “Firm” – near Hillside (thanks Harry Roberts). The firm was so-called, not after any particular business enterprise but because, it was the site of a large (ahem) “recycling facility” that had to be trampled down (‘firmed’) for stability.

1924 saw another busy year with fixtures against Civil Service, Civic Guards, Colmcilles and Shamrocks. Highlights of the season were a celebrity appointment in Enniskerry (more later) and the inclusion of two players – Byrne (which one?) and Ledwidge in a trial for the Dublin County Juniors.

The team carried on through 1925 and 1926 though they were finding it hard to keep in touch with dominant sides like Lusk & Civil Service. By October, they had only tasted success in 3 out of 21 fixtures.

After that, Cartlann Digiteach Cuala lost sight of this team and it was assumed that the team might have disbanded. But lo and behold, the hurling story was not over – we found them on the fixture list in 1932. Alas their game against Bray Emmetts was a walk-over. Though isn’t it fitting that both clubs are still thriving 90 years on.

At the time, Cuala supporters might have found the going tough but surely we can now look back with pride at this wonderful team that set us on our long journey to greater things.

Fun Question: When was the last time a local sporting event yielded two winners, a Cuala Hurling team and a horse?