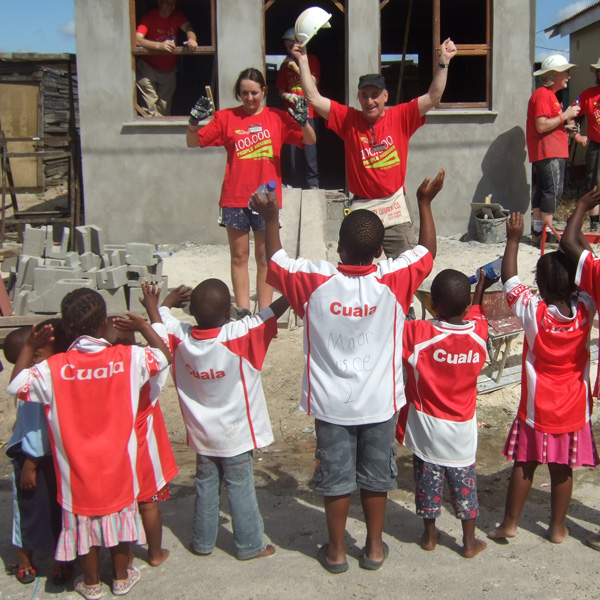 Cuala’s newest fans celebrated with Mary Sheanon and her dad Mikey on the completion of another successful trip to Wallacedene, Cape Town.  It was all part of the final Niall Mellon Building Blitz 2012 in South Africa earlier this month

The Sheanons, who were part of the “Red” team (naturally) are very thankful for all the support they got from their friends in Cuala.  And a particular word of thanks must be offered to Mrs Buckley, Principal of Harold Boys , Dalkey for the generous donation of jerseys.

Wallacedene (pop. 21,000) is one of the poorest townships in Cape Town.  It is estimated that one in three suffers from HIV and it is recorded that there is a particularly high incidence of HIV amongst children aged thirteen and upwards. Second-level education for local children typically ends at we would call  first year here at home.

The work done by the Charity over the years in this neighbourhood has been tremendous and came to a close this year as the local authorities assumed responsibility for ongoing work.  We hear the destination for Building Blitz 2013 will be Kenya!  Somehow, we think this Cuala story is far from over.

You can see more images in the Cuala Gallery

And there’s even more in the Red Team Photo Album