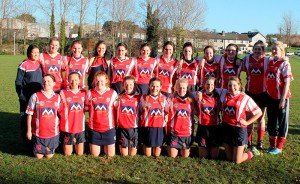 Cuala vs. Lucan Sarsfields B played in Meadowvale

A battling performance from the Cuala minors saw them qualify for this Friday evening’s C Championship final with a hard won victory over our arch nemesis of recent years, Lucan Sarsfields. Cuala got off to the best possible start scoring 1-2 to no score in the opening 5 minutes with the wind to their back. Lucan fought back however and with 10 minutes remaining of the half were only a point behind. Cuala finished the strongest however and were somewhat unfortunate to only go in ahead by 3 points at half time, 1-4 to 1-1.

Facing into the wind in the second half it was all still to play for and again it was Cuala who started the stronger scoring 1-1 to 0-0 in the opening 3 minutes. Once again Lucan fought their way back into the game and mid way through the half it was back to 3 points, Cuala 2-6 to Lucan 2-3. The game was now really in the melting pot as both sides battled furiously for any advantage. With 5 minutes remaining the visitors pulled it back to 2 points and a minute later Cuala were hit by a Lucan breakaway goal putting them behind for the first time in the game with only minutes remaining. This Cuala team is made of stern stuff however and there was no way they were going to be beaten again by Lucan. In a frantic last 4 minutes of normal time Cuala scored 2 magnificent points to lead by 1 point with 30 minutes gone on the clock. There was still more drama however with the referee playing almost 4 minutes of injury time but it was Cuala who once more finished the stronger adding another point in those final frantic minutes to the delight of the large Cuala support. There were scenes of delight at the final whistle, the score line reading Cuala 2-9 to Lucan’s 3-4, a well deserved win after a tough battling performance.

Great and all as it is to finally beat Lucan, it was still only a semi final and another step to our current goal of winning our first minor championship. To qualify for the final the girls have now racked up 15-39 to 8-06 in their 4 games to date (54 scores to 14 – impressive by any standard). Our other great rivals, Kilmacud Crokes now stand in our way, so we’re hoping for another big turnout of Cuala support this Friday, time and venue to be confirmed ……..

Having topped their group with impressive wins over Commercials away (7-11 vs. 0-00), Naomh Olaf away (4-12 vs. 2-02) and Kilmacud Crokes at home (2-07 vs. 3-00), Cuala had home advantage for the semi final where they faced their arch rivals over the past number of years, Lucan Sarsfields.

It was a bright but bitterly cold morning and despite the time of the year, the Meadowvale pitch was in splendid condition, with grass cut and pitch lined. Cuala lost the toss and played with the wind to their back. The home side got off to a flying start however with Juliette O’Flynn opening the scoring within 2 minutes with a well taken point following good work from Asia Kirwan. 2 minutes later Katie O’Dea added another point and when Amy Donnelly forced the ball over the line after a goalmouth skirmish almost immediately afterwards, Cuala were 1-2 to 0-0 ahead with only 5 minutes played. A free on 10 minutes opened Lucan’s account and for the next 10 minutes the game ebbed and flowed with both sides making few chances up front. 20 minutes in and a speculative shot from a 65 for Lucan dropped straight into the Cuala net to put the visitors right back in the game. The Cuala response was magnificent however and for the last 10 minutes of the half Cuala were in control and unlucky to only add 2 further points to their score. Half time score Cuala 1-4 vs. 1-1 Lucan Sarsfields, Cuala well worth their 3 point lead.

Playing into the wind in the second half the girls really rose to the challenge. Similar to the first half Cuala were first out of the blocks and a super Blaithin Lane goal in the first minute really rocked Lucan. Katie O’Dea added a trademark point 2 minutes later and for the first time in the game there was clear daylight between the sides, Cuala ahead by 7 points. A strong side like Lucan was never going to lie down however and slowly they fought their way back into the game. A point on 8 minutes settled their nerves and a goal on 13 minutes put them right back in the game again, only 3 points between the sides and all to play for. Again Cuala responded magnificently with a point from a Katie O’Dea free and once more the Cuala girls upped the tempo. The next 10 minutes of the game were not for the faint hearted with fierce exchanges and both sides giving everything. Clear cut chances were few and far between but it was Lucan who took theirs, adding points on 16 minutes and 23 minutes. With only 5 minutes of normal time remaining what might have been the crucial score of the game happened. With Cuala getting on top again around the middle, a Lucan breakaway resulted in the sliotar ending in the back of the Cuala net, Cuala behind for the first time in the game with less than 5 minutes of normal time remaining. For a horrible moment there was a sense of déjà vu, as in the past, late Lucan scores and tight finishes have resulted in narrow Lucan wins but today there was no way Cuala were going to be defeated. Cuala pressed forward again and within minutes were level with a Katie O’Dea point from a difficult angle. A minute later with 30 minutes showing on the clock Juliette O’Flynn pointed from distance and Cuala were back in front. It had been a full blooded second half with a number of stoppages for injuries so it was now in the hands of the referee as to how much injury time would be played. It was Cuala however who looked the most likely and rather than sit back and play down the clock for the last few minutes they pushed forward again and Niamh Collopy eased the nerves with a point 3 minutes into injury time. There was still time for another Lucan attack however but again the Cuala defence were resolute and there were great scenes of joy seconds later when the full time whistle sounded. Cuala ahead by 2 points, the Lucan bogey finally laid to rest and a place in Friday’s final beckoning.

Today wasn’t about looking back however, and on the day all 18 players that featured were outstanding. Dublin U16 goalkeeper Clodagh Sheehan was as dependable as ever and her lengthy puck outs make a big difference in both halfs. In the full back line, Hannah Nash and Deirdre Ni Thighearnaigh made life extremely difficult for the Lucan corner forwards while in the middle Catherine Garner’s reading of the game was once again impeccable. Halfbacks Caitlin Byrne, Eleanor Moore and Cara Sullivan, were outstanding in defence where the repeatedly repelled Lucan attacks. At centerfield Sinead Murphy was immense showing why she was on this year’s Dublin U16 team and why she was recently awarded this year’s Dublin U16 Division 1 player of the year. Her centerfield partner, our own human dynamo Niamh Collopy, ran herself to a standstill when injury forced her retirement mid way through the second half but she answered the call in the final few minutes when she returned to the fray to score the final point and settle Cuala nerves in injury time. Up front Blaithin Lane, another of our U16 Dublin panellists, played a lot of good ball scoring a good goal, while team captain Juliette O’Flynn led by example, opening the scoring to settle the team early on and getting a crucial score immediately after Lucan scored their first goal. Amy Donnelly might play football for Foxrock Cabinteely, but she’s a real Cuala girl when it comes to camogie, scoring our opening goal in the first half and linking well with the other forwards throughout the half. Katie O’Dea was once more our top scorer on the day, including scoring that crucial equalising point within minutes of Lucan going ahead with time almost up. Niamh Dunne played probably her best ever 30 minutes in a Cuala jersey in the first half, making one outstanding catch and making a number of telling hand passes. Hannah O’Dea, our Dublin U16 dual star, once more showed her versatility, starting at centre back where she played a commanding role and then moving to full forward where she caused all sorts of trouble for the Lucan full back line. In the corner Asia Kirwan, continually showed well for the ball getting in good positions, while half time substitutes, Orla Quill and Cybi NicGearailt, battled all the way and made life very very difficult for the Lucan goalkeeper and full back line, with both Cuala girls instrumental in winning a vital free at a vital time in those final 10 minutes.

Finally, special thanks to the large Cuala contingent from all sections of the club who came out to support the girls, it made a big difference particularly in those frantic last 5 minutes when the game was still up for grabs. Luckily, it was Cuala who grabbed it with both hands but although it was a great victory, especially against our arch nemesis of recent years, it will mean nothing if the girls don’t go on to win the final. Waiting for us will be another arch rival, our neighbours Kilmacud Crokes, out for revenge having been beaten by us in the last game of the group stages by 4 points.