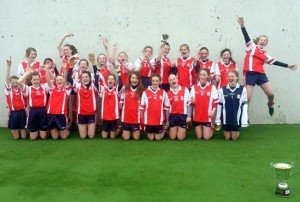 Well done to the Cuala 99 Girls who won the Division 3 Dublin Féile this afternoon by beating O’Dywers 1-6 to 0-3 in Finagllians, Swords. Yesterday the Cuala Girls won 3 of their 4 group stage matches, their only defeat was to O’Dwyers, so to beat them today in the final was some achievment. Congratulations also to the Girl’s Mentors, Maria O’Sullivan and Orla Dunne who have looked after this age group since they first entered the Cuala Academy many moons ago. Here’s a photo of the Victorious 99’s with their Cup.

The phenomenal growth of the girls side of Cuala came of age today with a first Féile victory for a group that started at the tender age of 6 and 7 in the academy before progressing to the then newly formed Juvenile Girls section of the club.  The under 14, 1999, age group won division three of the Dublin Ladies Football Féile today. The majority of this group have been playing together since they were in the ranks of the Cuala academy and have been mentored and nurtured since then by Orla, Celestine and Maria.  Their coaches, Derek and Cecil, came on board when the girls were playing under 10 and it is to their credit that they have brought the girls to this stage.

Today, and the group stages yesterday, saw a group of girls bond together and play their hearts out with determination and pride in the red jersey of Cuala.  The girls have been a pleasure to work with over the years and their sporting behavior today exemplified all that is great about Cuala. Our hope now is that they continue to play together and move towards minor and adult games  in their club.