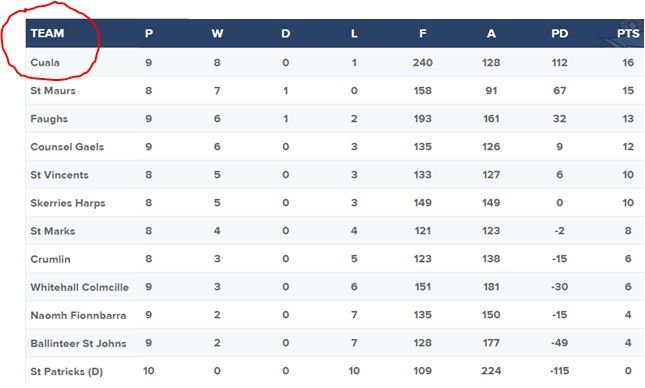 With just three games remaining in JHL5, Cuala hosted Nmh Fionbarra at Shankill in what was a crucial game in terms of striving for automatic promotion. Cuala started very well in this game and were 5 points up thanks to scores from Darragh Twomey, Luke Keogh and Cillian Sheanon, before Finbarrs registered their first point of the game. In defence, Cuala were well organised with Stephen “Butsy” Butler and Rob Reid orchestrating affairs. Niall O’Dowd, Karl Schutte and in particular Conal O’Kelly were well on top of their brief, dealing well with a string of Finbarr attacks. In midfield, Donal Lan and Cillian Sheanon were working well together with Lane providing excellent support to the Cuala half-backs, while Sheanon was getting forward in attack. Up front, Cuala, well led by Eoghan Breathnach at centre-forward, were creating good scoring chances. Justin Byrne, Andrew Murphy, Luke Keogh and David Ryan were putting good passes together while Darragh Twomey was unerring in his free-taking. A good day for Cuala’s 2nd team which now puts them in real contention for automatic promotion and league with just two games remaining. Final score from a sunny Shankill, final score was Cuala 1-18 Nmh Fionbarra 0-10

Big Weekend ahead for Adult Footballers
Scroll to top