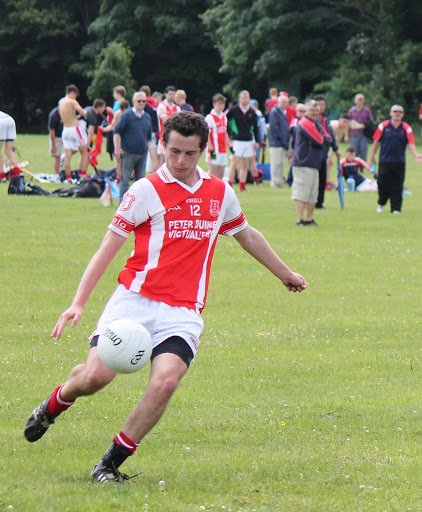 Midweek matches in summer always bring their fair share of challenges. For our AFL 5 footballers, a trip to Finglas, a number of missing regulars and a tight pitch that was covered in the evidence of recently being mown were what faced them as they sought to build on their strong performances to date in the League.

Erin’s Isle started strongly and Luke Allen was prominent in repelling their early attacking forays before the marauding Jack Flynn slotted a neat point from a tight angle to settle the team down. From there until the half time whistle, the Cuala lads proceeded to produce a display of controlled, speedy and incisive football which the team from Finglas found hard to live with.

Dave Sheerin, Dylan Treacy and Collie Brock formed a red barricade and impressive defending bottled up the opposition attack who were restricted largely to sporadic scores from placed balls. Wingbacks Flynn and the speedy Donal Lane drove forward at every opportunity and together with the busy and hard-working midfield of Colman McKenna and Matthew Kiernan ensured a regular flow of ball into the Cuala attack.

Despite some rough treatment, Cathal O’Gollain and Gavin Hartnett won a tremendous amount of ball and carried to great effect. Ronan Sweeney was the focal point of the attack in which Cillian Sheanon and Dan Keating showed prominently giving their markers a torrid time. Dan (2), Gavin and Ronan all added first-half points to Jack’s opener. However, scorer-in-chief during this opening period was the wily Donal Lehman. All told, Donal had notched 2-4 by half time. The goals were contrasting in nature. For the first, he grabbed a high ball in front of goal before slamming the ball to the net. The second goal was the culmination of a flowing team move and some great work along the end-line from Cillian who slipped the final pass through to Donal who coolly slotted past the goalkeeper.

The half time team talk was all about keeping up the momentum and not letting the opposition back into the game. However, some fresh substitutes helped the opposition get a foothold and they got the first couple of second half scores. But this Cuala team is made of stern stuff. Dara Twomey came on for the injured O’Giollain and was a real livewire in attack. His fine point helped to stem the tide and further points from Sheanon and Sweeney kept Erin’s Isle at arm’s length. However, midway through the half, another couple of Erin substitutions provided further impetus and they began to dominate and scored five points in a row. But Cuala kept their heads, continued to play football and turned the tide.

The score that quelled the opposition fightback was typical of the quality the team displayed on the night. A brilliantly flighted kick out from Brian O’Ruairc who was a solid and reassuring presence throughout found its target. From there the ball was moved at pace with Flynn, Hartnett, Sweeney and Twomey all involved as the ball was worked to the highly effective second-half substitute Dylan Kennedy.  Dylan hit the target unerringly. This score finally took the wind out of the Finglas sails. A Hartnett free and neat Sheanon point meant that Cuala had the last three scores of the game as they closed the game out.

A great win in which the team showed that they can play flowing football and that they can dig in when they have to. A special mention must go to the guys who stepped up from the thirds panel and slotted in so seamlessly. They contributed much to what was a great team performance.