On Saturday afternoon the ’98 girls secured the U15 Dublin Division 2 Ladies Football title – an ultimately comfortable win over St Sylvesters was the girls’ 9th win from 9 games. The ‘98s now go in search of a clean sweep of wins in their last league game next Saturday against St Maurs. 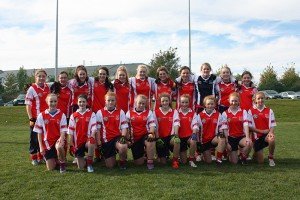 Cuala made the long trip to Malahide on a grey afternoon but the threatened downpour never materialised – this suited the Cuala girls preferred style of fast moving possession based football. Syls always start strongly however and this was no exception with the Cuala backline under immediate pressure. After Syls got the opening scores to lead 1-1 to 0-0, however, the Cuala full back Anna Moran came into her own and was in her normal defiant mode – making many vital interceptions and breaking clear to turn defence into attack. She was ably supported in the two corners by Cara Sullivan and Dervla Madden, each as doggedly determined as the other. At the other end of the field the placing of Niamh Collopy at centre forward and Sinead Murphy at full forward started to reap dividends with their pace and strength proving a challenge for the home defence. The pressure turned to scores with Murphy notching 1-2 in the first 15 minutes to put the Cuala girls in control of the game. For the next 10 minutes it was all Cuala with the human dynamos in midfield, Hannah O’Dea and Billie Kate Huggard, scrapping hard for possession against bigger opponents and surging forward time and again to set the forwards free. Keela Sexton, Saoirse Gallagher and Lasariona Huggard had taken charge of the half back line and Sylvesters were finding it hard to get into threatening positions.

In the meantime Clara Ahern at top of the right was also getting into her stride and she had 2 fine goals netted and added a point prior to the break. A speculative effort from Blaithin Lane found its way over the ‘keepers head before Murphy netted her second with an unorthodox but effective finish. Lane also showed calm nerves in kicking two flawless frees. Cuala were cruising but it was inevitable that they could not maintain their dominance and Sylvesters netted two goals before the break to remind the Dalkey girls that they would need to remain vigilant. Half time score was 5-7 to 3-1.

At half time Clodagh Sheehan, who had played steadily in goals and distributed very effective kick outs, swapped positions with Sorcha Barron who had played very well in the half forward line, kicking an excellent point. This change was seamless with Barron very assured in goal and Sheehan showing very well for possession and kicking a fine point of her own in the second half. Eleanor Moore and Grace Hazley were by now sweeping across the back line and driving forward  – one such move from defence was poetry in motion and ended up with the busy Eve Martin sending a rocket to the Sylvesters net. Clara Aherne was now everywhere and popped up with another goal to secure a hat trick (3-1) as did Sinead Murphy with her third goal for a total of 3-3, whilst the third member of the full forward line Bliathin Lane was not to be outshone with her second goal for a total of 2-2. Holly Heffernan won much possession in the forward line in the second half and was involved in many of Cuala’s sweeping attacks.

So, a comfortable win in the end for the 1998s .. by 9-8 to 4-1 … but St Sylvesters never gave up the battle and ensured the Cuala girls had to stay focused and work hard to secure the win and the title.

The performance was a great reflection of the work the 98s have put in since the start of the year – both fitness work and ballwork – and in particular their kick passing and scoring were top notch.

Julia Healy and Cliona Dorman were not available on Saturday but each played a significant part in the 9 match unbeaten league run.

So its onwards and upwards to Division 1 for the 1998s – a level at which they already play in camogie. Well done to each and everyone one of the girls for their efforts on Saturday and throughout the whole year.