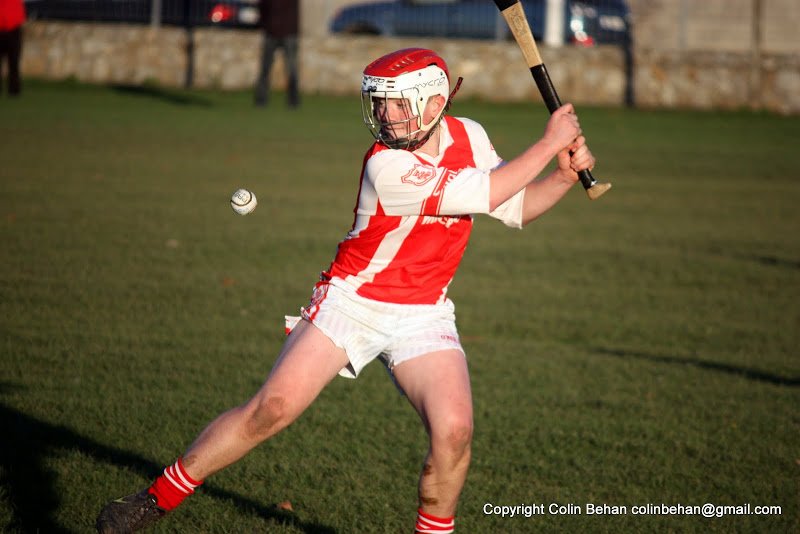 A magnificent two goals and two points from play in the dying embers of this game saw Cuala’s Band of Brothers move back to joint second in Division 1 of the U15 Hurling League.

Coronella was magnificent at full-back. He hardly put a foot wrong all day and dominated proceedings from the start. The introduction of Mark O’Treasaigh at half-time and the move of Emmet Murphy to full-forward with 10 minutes to go turned what looked like certain defeat into a victory for the Dalkeymen.

Clontarf were physically stronger down the middle and had serious talent at mid-field, centre-forward and full-forward. They play a very robust, physical game and have hurlers up front that can hurt you. But Cuala are made of solid stuff. They will never, ever give up and fight like dogs until the final whistle.

Cuala started sluggishly and Clontarf opened them up for two points before McDonnell and Wylde levelled proceedings. Clontarf posted three more points from their centre-forward and full-forward before Emmet Murphy converted a free on 20 mins. At that point it didn’t look good for the Cualamen as the Northsiders moved up the gears and found gaps in the Cuala defence with some intelligent play and slick passing. That is, until they met with the immovable object that was Brian Coronella at full-back. Sometimes leaders are identified by their actions: they hold their heads and go forward when everyone else is in retreat. Coronella gave a Master-class in defending when Clontarf should have been through for goals. He would not be beaten. McMahon and Lane on his flanks held out an onslaught of attacks that would eventually prove costly for the sea-siders from Clontarf. DiFelice in nets made crucial saves. Cuala settled. Johnson was his usual industrious self around the middle. McDonnell was always dangerous on the left, and helped himself to two points before the interval. Jack Hartnett, marking Clontarf’s most dangerous player, took a wonderful long-range point from mid-field and Murphy converted a free at the death to leave Cuala up by the minimum 0-7 to 0-6 at half-time. There was hope: Cuala had spurned three reasonable goal-chances themselves. However, it looked to the supporters on the line that whoever scored the first goal would take the honours.

The Clontarf goal came after 10 minutes of the re-start. The ball should have been cleared twice, but the physical strength of the Clontarf attack put the ball beyond DiFelice to the Cuala net. Clontarf had the break-through they needed and a three point cushion 1-7 to 0-7 entering the final quarter. The Cuala side-line had gone quiet, most resigned to what looked like an inevitable defeat. However, this great team had other ideas! Wylde started the fight-back. He clipped over a point he should never have won. Murphy was having no joy at half-forward and was moved closer to goal. McCarthy’s legs were introduced to the half-forward line and O’Tighernaigh and Newman brought in to freshen up the attack. With 5 to go the drama began. Murphy latched onto a pass from O’Floinn and struck like a rattle-snake for goal. The keeper parried the shot and Mahony buried the ball to the back of the net. The game was level 1-8 apiece. Clontarf were getting nervous and running on empty. Cuala obviously hadn’t read the script. They pressed forward and began to re-take the initiative. O’Drisceoil was now playing out of his skin at centre-back and driving Cuala forward. James Murphy and Diarmait Maas joined in the chorus. Cuala won a dirty-ball on the 21’ and Murphy threw a pass to Myers in front of goal. A point was on offer, but Fionn had other ideas. He crashed the ball to the net passed a bewildered Clontarf keeper and buried any hope of a Clontarf come-back. The Cuala line went into delirium. 2-8 to 1-8 and Clontarf hadn’t scored for 15 minutes. To their credit, Clontarf didn’t lie down. Two points late in the game were answered by a magnificent strike by O’Drisceoil and a sweet strike by Murphy as the game went into injury-time. Six minutes later it was all over. Cuala had come back from the dead and had won on a score-line of 2-10 to 1-10.

Footnote: The Man-of–the–Match was Brian Coronella by some distance; definitely one to watch for the future.