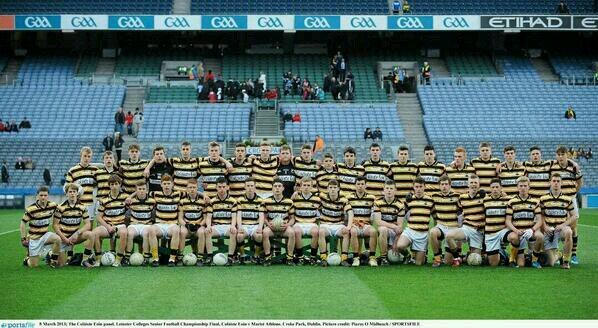 Coláiste Eoin claimed their first provincial title since 1998 when narrowly overcoming Marist College Athlone in a thrilling decider on Saturday under lights in Croke Park. Coláiste Eoin had 6 Cuala Players in their starting 15 and a total of  14 Cuala players on their panel.

The win was secured thanks to a dominant second-half performance, with Cuala’s Conn Ó Ceallacháin’s nine points proving pivotal.

Marist started in the ascendancy and opened the scoring in the second minute as Niall Neary pointed from distance following Luke Carty’s driving run.

Ó Ceallacháin converted two frees to hand the gaelscoil the lead for the first time but, with Carty impressing, initially from wing-back, Marist soon levelled matters through a ’45’ from Conor Marlow and regained their advantage when Charlie McMickan slotted over off the upright in the 10th minute.

McMickan had been Marist’s scorer-in-chief en route to the final and three minutes later he collected Terry Byrne’s pass before driving a precise finish low into the corner of Seán Ó Dubhláin’s goal.

Marist were dominating centrefield and extended their lead as Marlow struck another glorious ’45’, with Coláiste Eoin’s defence coming under increasing pressure.

With the contest appearing to slip from their grasp, Ó Ceallacháin helped his side regain their composure, the Dublin minor adding two superb points from play and a free to reduce the gap to 1-5 to 0-5 at the break.

A sublime Ó Ceallacháin point within 30 seconds of the restart hinted at improved fortunes for his side but Neary responded immediately to restore Marist’s three-point lead with an excellent point on the run.

However, the game changed irrevocably in Coláiste Eoin’s favour from the resultant kick-out as Rian Mac Giolla Bríde’s lengthy delivery was gathered by Colm Ó Néill, who fired an unstoppable shot into the roof of Shane Mannion’s net.

Although Michael Monaghan clipped over a fine score to restore the Athlone school’s lead, they were struggling to find space against an excellent Coláiste Eoin defence, and the irrepressible Ó Ceallacháin landed two points in quick succession, followed by a score from Fionn Ó Riain Broin.

Neary replied in the 53rd minute, but Marist spurned a couple of golden opportunities as the clock ran down and their fate was sealed with a minute remaining as Ó Ceallacháin notched his ninth point to confirm Coláiste Eoin’s progression to the All-Ireland semi-final.

Footnote: Coláiste Eoin now advance to the All-Ireland stage when they will feature in the Hogan Cup semi-final on March 29 against the winners of the MacRory Cup final that will be contested by St Pat’s (Maghera) and Omagh CBS on St Patrick’s Day.