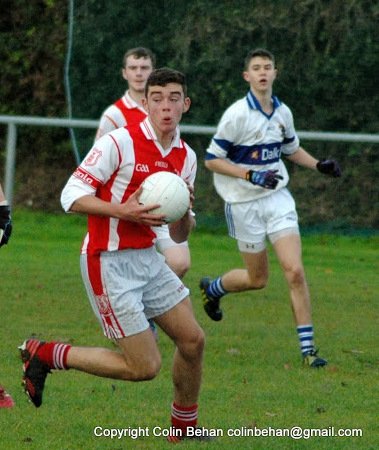 PNU on Sunday morning. With sharpshooter Daragh Spillane heal to hip in cast Cuala brought in Niall O’Callaghan to their forward line and it was Niall’s early industry which earned Cuala a free which

his older Brother Con dispatched to open Cuala’s account. The opening exchanges were frantic and some smart defending from Eoin O’Naoire and

Enda Kelly kept Vincents scoring chances to a minimum. Cuala were struggling to gain primary and even secondary and after the first quarter the teams were tied at 3 points each. Finally Cuala

got a foothold in midfield and a storming run from Jake Malone through the heart of the Vinnies defence opened the way for Donal Lane to coolly slot the ball under the keeper into the back of the net.

This score completely settled Cuala and for the remainder for the half they were rampant, Diarmuid Sexton began to impose his physical presence on the Vinnies back line and clipped a couple of nice points. The score of the half came from a wonderful effort from Con O’Callaghan as a long range looping strike off his left eventually nestled on top the Vinnies net for a majestic point. As the teams broke for half time Cuala enjoyed a comfortable lead on a score line of 1-09 to 0-04.

On the resumption of play you could sense that Vincents knew that it was now or never for them as they threw everything into hauling back the lead, but Cuala boxed clever. Employing short Kickouts and moving the ball intelligently they were able to keep Vincents at arm’s length. Sexton was now winning every type of ball that came his way and Dylan Treacy and his fellow half backs Jack and Mattie were marshalling Vinnies danger men effectively. Neat points from Hartnett, Sexton and accurate free taking from Con meant that a late Vincents goal was immaterial. Indeed Cuala finished off the game with a couple of well worked scores to ensure there was going to be no late drama. The game ended Cuala 1-16 to Vincents 1-08 , overall an excellent team performance but special mention must go to Niall O’Callaghan whose selfless work rate and hard running combined with excellent distribution earned him the MOTM award.

Fogra Eile: In attendance at Sunday’s game were Vincents & Dublin blue bloods Brian Mullins and Dave Billings, and yes they did express surprise that Niall O’Callaghan such a tireless and self-less team player was directly related to Maurice.

U15 A Hurlers Take the Division 1 Shield
Scroll to top