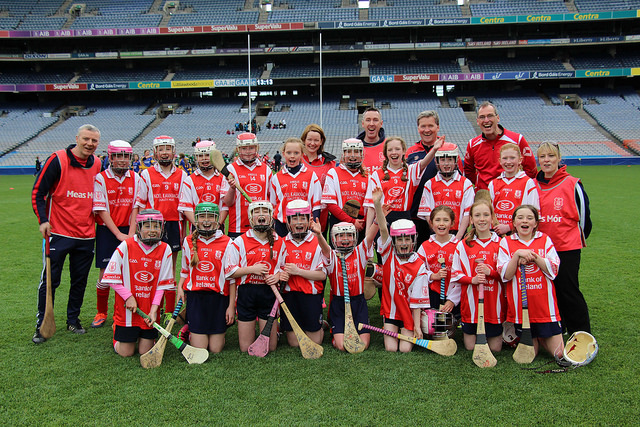 Easter Monday last was a day to remember for Cuala’s 05 Girls who were among the 1200 girls from 64 clubs who took part in the Camogie Association’s Camán to Croker event in Croke park.

After registration the girls had a tour of the dressing-rooms and warm-up area before following in the footsteps of so many GAA legends over the years by running down the steps, out the tunnel and onto the hallowed Croke Park turf.

Cuala were drawn in a group with Brian Borus from Tipperary, Mayobridge from Down and Galway’s Mullagh-Kiltormer. The Dalkey girls got off to a nervy start in their first match against Mullagh-Kiltormer and conceded some soft scores from their own puck-outs. They did much better in their second game, against Mayobridge, and dominated territory and possession but just couldn’t translate that dominance into scores. In the final game they played Brian Borus who had won both their other matches handsomely. The Cuala girls had learned from their earlier games though and vastly improved their shots to scores ratio to run out 5-0 to 1-1 winners. All in all it was a great day out and an opportunity for the girls to play against clubs they wouldn’t normally meet and show off their skills in one of the best stadiums in the world.

Many thanks from the 05 Girls and their parents and mentors must go to the Camogie Association, and Eve Talbot in particular, for their fantastic organisation of such a huge event.

More pictures can be found in the Cuala Gallery