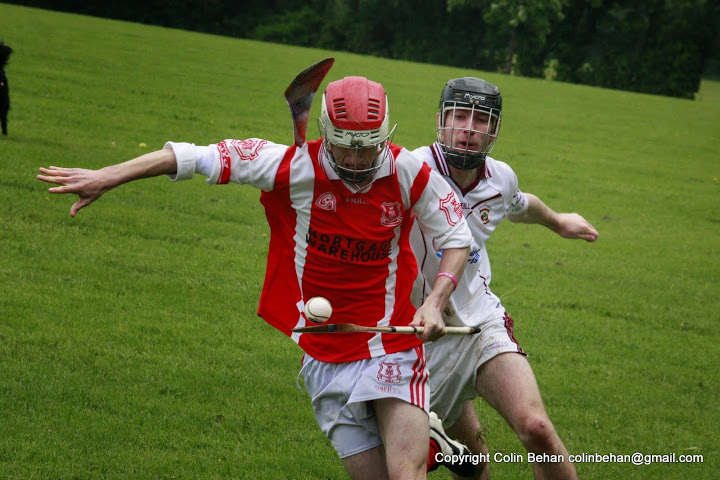 Eoghan Breathnach’s powerful display at centre-forward was the crucial difference for Cuala in this bruising League encounter in ShanganaghPark. His strength in taking possession, his ability to turn quickly and his powerful running made him almost unstoppable. He took a goal of his own in the last minute to win the game and was easily the man-of-the-match in this closely fought encounter with Raheny. He also took over the free-taking duty on a difficult, wet morning and lobbed over two crucial frees one of which fell onto the cross-bar, and hopped over.

Andy Browne at full-back and Seán Moran in the middle of the field together with lively Minors Justin Byrne and Shane Murphy in the forward-line were others to catch the eye.  Cuala’s two other goals came from frees. Niall Carty and Seán Moran dropped two long-rangers into the square and both ended up in the back of the Raheny net. Raheny’s response was not much better defensively. A mix up between the Cuala keeper and his full-back as they were clearing a ball, allowed the Raheny corner-forward to sneak in and win possession on the left. He passed the ball across the square to his full-forward who blasted into an empty net.  Cuala needed someone to stand up and be counted and Breathnach answered the call. There was no way he was going to be on the losing side today. Final score, Cuala 3-11, Raheny 2-13.

Footnote 1: There was a disputed score-line at the end of this game. The Raheny Team Management was sure that referee David Fitzgerald had got his sums wrong. Raheny had it that the game was drawn, but Fitzgerald, and more importantly, his note-book, had Cuala up by the minimum.

Next up: Cuala play their next league match on 22nd June away to Plunkett’s Eoghan Ruadh at 11:00; following that they play home to Skerries Harps on 6th July at 11:00.