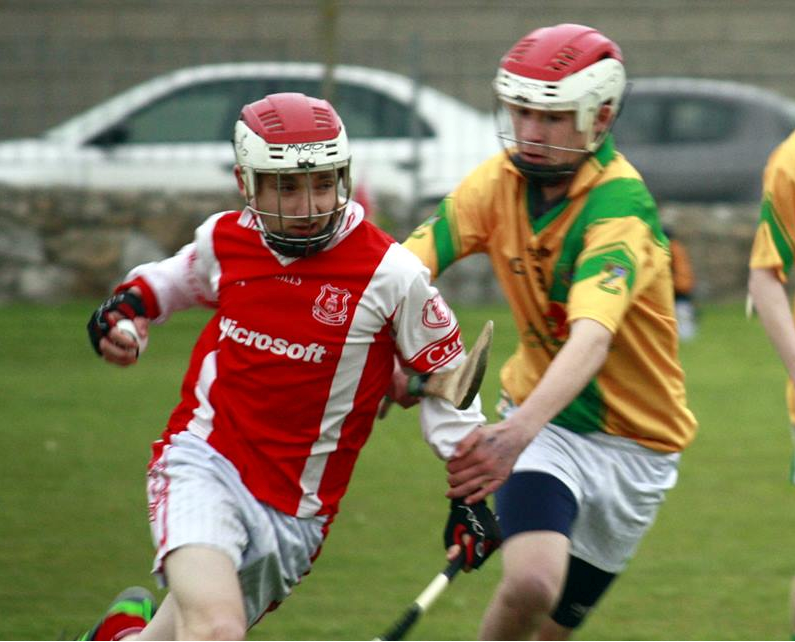 Battling ’98s go down to Faughs

Three points in the last 2 minutes of this enthralling game gave victory to the visitors in this wonderfully exciting game in perfect conditions in Thomastown Park.

Whoever said size doesn’t matter? The physically bigger and stronger Faughs players eventually wore down the Cuala resistance and took the spoils in the dying embers of this thrilling contest. It wasn’t an evening for the faint-hearted. Two very skillful teams were going at it hammer & tongs right from the start. Emmet Murphy opened his account early with a super point off his right, but Faughs were well up for the battle and led 4 points to 1 after 10 minutes. The strength and size of the Faughs ‘diamond’ was critical and McVeigh in particular at centre-forward was outstanding for the green-and-golds. Early on, he latched onto a ball around the middle, slipped two tackles and outpaced three Cuala players as he raced goalward. Rory McMahon threw himself into his path and stopped a certain goal, but had to be taken off with a suspected broken finger for his bravery. They found it difficult to deal with their bigger opponents, but Cuala began to win the battle around the middle with some heroic defending from Cathal O’Floinn and James Murphy, and the dirty ball began to move in Cuala’s direction. Space was at a premium. Both sides were hooking and blocking and it was difficult to earn a clean strike. Murphy looked dangerous upfront and clipped over his second on 13 minutes; O’Drisceoil struck a ’65 to keep the score-board ticking over. Such was the effort from Cuala, that Faughs were held scoreless for the final 10 minutes of the half. Mickey Wylde took a wonderful score way out on the left following heroic work from O’Floinn. Big Joe Mahony caught a loose clearance on the 50 as the inside forwards blocked a clearance, and threw over a long-range effort to leave the game finely balanced at 0-5 each at the break.

The re-start saw Cuala take the lead as O’Treasaigh was upended and Murphy slotted the resulting free. Faughs were now feeling the full pressure of the red-and-white onslaught. Their keeper was performing all kinds of gymnastics to clear his line, but the ball just wouldn’t go in for the reds. They needed a break and, as usual, up stepped Stevie McDonnell. His crisp strike on the left was blocked by the defenders but he went again and hit a rasper to the right corner of the net. It looked like it might be the decisive blow! But the net was still shaking as the Faughs keeper took a quick puck out to an unmarked half-back. He dispatched it up to McVeigh and in an instant the Cuala goal was wiped out. Cuala’s celebrations were quickly stifled, 1-6 apiece six minutes into the half. O’Drisceoil at centre-back was now playing out of his skin and holding sway around the middle. He came to the line with an elbow injury and in the intervening confusion, McVeigh took advantage of the space and crashed his second to the net. Cuala had to climb again and Murphy, leading by example, took his third from play following good work from Myers out on the right. Another pointed free from him put the minimum again between the teams 1-8 to 2-6. Cuala began to dream again. Hartnett and McCarthy worked their socks off to keep Cuala ahead, but McVeigh wasn’t having any of it. He clipped over another point. Cuala still wouldn’t lie down. The game was there for the taking but their engines were running on fumes such was the intensity of the battle. Coronella was awesome again at the back; Lane and Quinn played their hearts out; Di Felice is becoming a world-class keeper. Wylde caught a puck-out in among the flying sticks and struck a sweet point he had no business scoring. Johnson came in to add energy around the middle. O’Drisceoil pointed a huge free from his own back yard; O’Floinn added another on the right. The game was turning in the direction of the red-and-whites! Murphy, with the whole of Dalkey biting their nails, hit a huge free to put Cuala up by the minimum with two minutes on the clock. What a game! But could they hold on? The effort was too much. Three scores at the death for the Templeogue outfit, two from frees and another majestic McVeigh point, sealed Cuala’s fate. But what an outstanding performance from this great team; they have come a long way in a short space of time.

Footnote: As the other results unfolded, there are now two points between the top five sides in this very competitive League. A six point win today would have seen Cuala top Division 1; as it is Cuala lie fifth with two matches remaining.