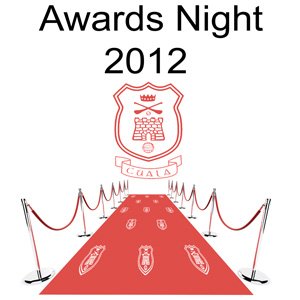 Preparations for Cuala’s biggest social event of the year – the Annual Awards Night – are well advanced.  Speculation is mounting too as to who will win the coveted trophies at the  premier sporting occasion in the  Royal Marine Hotel, Dún Laoghaire on Sat 18 Feb.

There’ll also be presentations  to

Of course there are other nominees – those hard-working members who have been delegated to sell the hottest tickets in town.  We say ‘sell’ but, at just €15 a ticket, some would say were giving them away so you’d better be quick and place your order before supplies are, like the committee, exhausted.

The Awards will start at 20:30 sharp and be finished by 22:00 so you can dance the night away while Finger Food is served