Sounds familiar? Another trophy for the Cuala silverware cabinet. “Music to my ears” I hear you say and you’d be right. This time, its the turn of the cultural wing of the club who struck the right notes at the Scor na nÓg County finals in their debut appearance. And the result – Champions of Dublin. Grupa Cuala comprised Micheál Og O Gralaigh, Cliona Nic Caba, Conal O Ceallaigh, Nessa Lahert and Jack Lahert. The group won their semi-final Naomh Mearnog and followed it up by winning the Ccoil Ui Chonaill trophy at Dublin final in Craobh Chiarain Parnell park on Wednesday. They were in competition with a number of other finalists including Scoil Ui Chonaill, St. John’s Balinteer and Lucan Sarsfields. Cliona also repesented the club in the final of the amhranaoicht aonair competition. The grupa will now proceed to represent Cuala and Dublin in the Leinster semi-final in Leixlip Co. Kildare on Sunday 12 Dec. 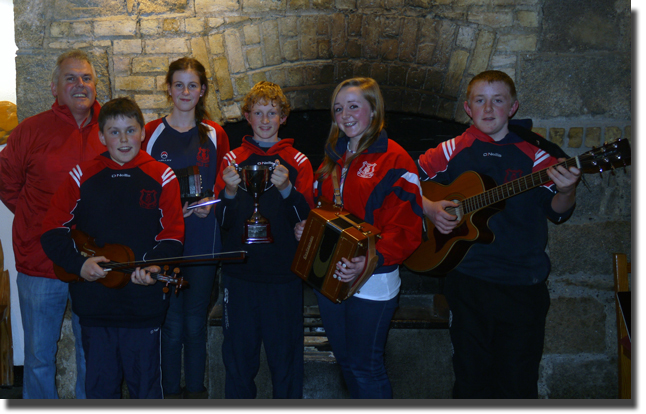 U10s Make it All the Way to Humphrey Final