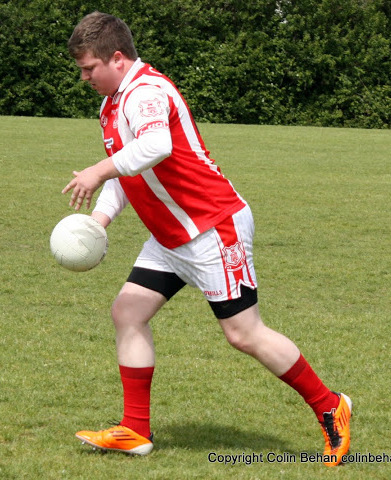 Michael Kennedy has been involved with Cuala for less than ten years, but has already become a Integral part of the club. Micko has been a keen footballer since walking up to Hyde Park at 15 years of age, but has now taken up new roles as a coach, as well as becoming a key member of the clubs communications team. In his own words, “I’m kind of the end product. I have a nice team behind me who gather up all the info, and I send the texts out.”

But a very exciting year lies ahead for Micko as he is joining the management team of the senior lady footballers, along with John Sheanon and Alex Brock. “The Three of us are going in to help out Siobhan Brown, and hopefully bring a bit of success to the team. I mean, the three of us are natural winners. And we’re all coming off the back of major successes. John won last year’s intermediate championship, Alex was on the team that won the junior Championship a few weeks ago, and of course, I won the junior D title last season.” And while this is the trio’s first venture into management, Mick believes that they have the perfect blend. “John has a great footballing brain, Alex has the looks, and I’ll keep the girls grounded. And have a bit of craic with them at the same time, sure you know yourself.”

But of course, Mick has no plans to hang up his many pairs of boots. “I’m still a player first and foremost. I’ve a nice new pair of Preds for next season. But I’ll still break out the oul pink Nike’s from time to time.” Mick was central to the incredible third team that won the junior D championship last season, and says that one man was vital to that win, manager Enda McGowan who seems to win championships wherever he goes. “Enda McGowan will always have a special place in my heart.” Says Mick. “We had a great team spirit, but nobody thought we’d go and win the Championship. When the first team won the Champo, it was more relief than anything else. But we just went on a great run, and then celebrated like mad when we won!” And young Kennedy is quite well known around the club for having strong opinions about everyone and everything, so I asked him a few questions about his thoughts on the other players in the dressing room.

Eoin Breathnach. He has outrageous hair, but he doesn’t care. Somehow he pulls it off. He looks like Tom Cruise in ‘The last Samurai’ but he’s rocking it.

Niall Carty. He’s always just slugging it at the back.

Damien Hayes or Owen Hackett. They both give 100% at training.

Alex Brock. He always rocks up to training in a pair of chinos and a lovely pair of shoes. Even on a cold Sunday morning he’ll show up with a lovely scarf and a fancy jacket. He’s pretty much the full package.

Stephen Butler or Michael Fitzsimons. Butsy just has no style. And Fitzy tries too hard to be alternative. He walks around in ripped converse trying to be like his brother. But everybody knows that John pulls it off better.

And finally, who’s the funniest person in the club:

So if you’d like to see Mick in action next season, get yourself down to see the adult fourth team, where Mick will be both talisman corner forward, and team captain. Mick would certainly appreciate your support as he makes his coaching debut with the senior lady footballers. And thanks to his role with the communications team, you’ll be up to date with all upcoming fixtures.