On Thursday I spent all my night preparing for the big day ahead of me on Friday. 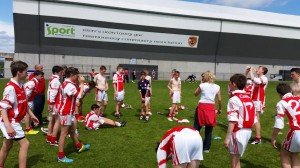 I had all my gear packed since Wednesday it consisted of my red cooper, my black cooper, my sister’s hurl, my uncles hurl and two of my own hurls, six pairs of socks and shorts, two pairs of boots, two screwdrivers, cable ties, a few spare grips electrical tape and screws.

It all came in handy.

I woke up early the next day to be at tescos for half nine, we had a puck about in tesco car park and then broke up in to the cars we were travelling in.  I went with Conall O’Toole and Tiarnán Ó’ Braonáin.

Paraic O’Toole gave us a lift up to Lavey.

The drive was long and Paraic told us a lot about politics but was fairly enjoyable too.

We reached Erin Own, Lavey GAA club at 12:30 we then had a puck about on the main pitch and met some of the Lavey locals.

Everyone in Lavey was so kind and hospitable.

As our first match was at 4 pm we had been eating healthily until we discovered the shop not too far down the road. (It was a small Costcutter)

Our first match was against Creggan from Antrim.

We scored 4-09 and Creggan scored 2-03 we had a handy enough win in the end but it was touch and go for a while.

The second match was against Shamrocks of Offaly was also won fairly handily, the final score being 4-09 to 1-03.

That was that for the day’s hurling.

After that we went into the club’s hall and met the host families we would be staying with for the weekend.

Myself and  Tiarnán Ó’ Braonáin were staying with Oisín Madden who plays  small wing forward for Lavey.

We had chippy, as they call the chipper for the dinner and we went to sleep around half 1 the next day ………………

We woke up the following morning at ten and  later that day we had our third group match against our new friends from Lavey.

They knew I was the captain and would be expecting high standards.

I found out as much as I could about their  players and how they played without showing much about how we play.

We had a good game but our quarter final, against Rosanellis from Laois, turned out to be as fast and intense as a senior match and skill level was huge.

They weren’t as sporting as the other teams we played against and their supporters taught us a few new ways to describe people from Dublin…but I’m sure they didn’t mean it.

r the rest of normal time.

In the end we were up by three points when they got a lucky goal to draw the match…..Extra time!….in extra time we were back to fifteen but suffered without Jim.

By the final whistle they had won by a jammy goal.

I was devastated with the result but that was just a warm up for the minor years.

All in all we had a great stay in the Derry, came home with some great souvenirs and made some great new friends. 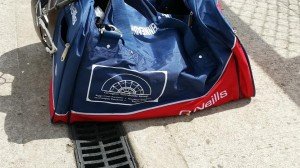 I’d really like to thank the 2 Alans, Johnny, Philip, Linda, Kevina and all the great supporters who came along to support us….especially Padraig O’F, who kept everyone at home updated on our progress.

Update on Aoife
Scroll to top