Cuala 2nd footballers travelled out to Crumlin determined to keep the pedal to the metal in their drive to win the league. A long list of injuries and absences abroad meant that the squad was stretched very thinly but there was confidence that the work which had been put in all season would mean that there would be enough fuel in the tank to get the job done.

Crumlin started the game well and a long spell of possession yielded a neat point. However, the Dalkey lads then settled to their task and began to dominate. Dave Sheerin, Enda Kelly and Craig Lawlor locked things up at the back so that the opposition were forced into some hasty shooting a lot of which fell short and was capably dealt with by Darragh O’Reilly in goals. This provided the platform for the dominant half back trio of Collie Brock, Ronan Murdock and Donal Lane to drive forward and initiate wave after wave of attack.

Colmán McKenna and Matthew Kiernan ruled the midfield area and together with some strong tackling and pressing throughout the pitch, Cuala penned the opposition in. This resulted in numerous turnovers and some swift attacking from the boys in red which Crumlin found difficult to deal with.

It was good to see the team mix things up with some fluid handpassing moves interspersed with intelligent long balls into the attack which allowed the forwards to get on top in their one on one challenges. They also had their shooting boots on and a succession of scores flowed in a first half which saw every one of the six forwards get on the scoreboard. Ronan Sweeney, Donal Lehmann, Gavin Hartnett, Mark O’Grady, Derick Tansey and Cillian Sheanon all worked the umpires overtime signalling some delightfully taken points. Matthew Kiernan also kicked a great score as Cuala built up an eleven points to one lead after 25 minutes.

At this point, a long accurate pass found Donal Lehmann about 30 yards from goal and he took off on a direct solo run through the stretched defence and finished low into the corner of the net. Four minutes later, Donal repeated the dose. This time, he got on the end of a slick passing move to once more give the goalkeeper no chance.

An entertaining and impressive first half ended with the scoreline reading CRUMLIN 0-1, CUALA 2-13

Cuala set out to make sure that they maintained the momentum through the second half and they got off to a great start with Mark O’Grady firing over a neat point after yet another well-worked team move. Crumlin then scored three frees as the referee continued to penalise Cuala’s enthusiasm in the tackle. However, the team did not slacken the pace and Mark O’Grady scored a neat goal from an acute angle after rounding the keeper and then finished to the net having been set up by Derick Tansey.

Tansey then got a goal of his own after another rapid-fire team move. The final 10 minutes saw Crumlin benefit from a few more placed balls but points from Ronan Sweeney, Donal Lehmann and substitute Luke Kelly saw Cuala run up an impressive match total of nineteen points to go along with the five goals which decorated a very imposing team performance.

From one to fifteen, each player gave an impressive individual display and, more importantly, contributed to a cohesive and fluent team performance.   Furthermore each of the substitutes that entered the fray slotted seamlessly into the team dynamic. Luke Kelly who came on after Murdock was the unlucky recipient of a black card topped off a fine contribution with a neat point.  Tiernan Lane who replaced the limping O’Grady was an industrious presence on the right flank and was extremely unlucky not to register a score. Eamonn Drumgoole (for Tansey) and Greg Egan (for Hartnett) ensured that the team continued to press forward after they entered the fray and kept motoring forward right to the end.

A job well done. One more game remains with Cuala in the driving seat in their quest to win the league. A September journey to Malahide to face St Sylvester’s is what lies ahead. The team know that a performance like Sunday’s is what is required – and they are determined to deliver it. 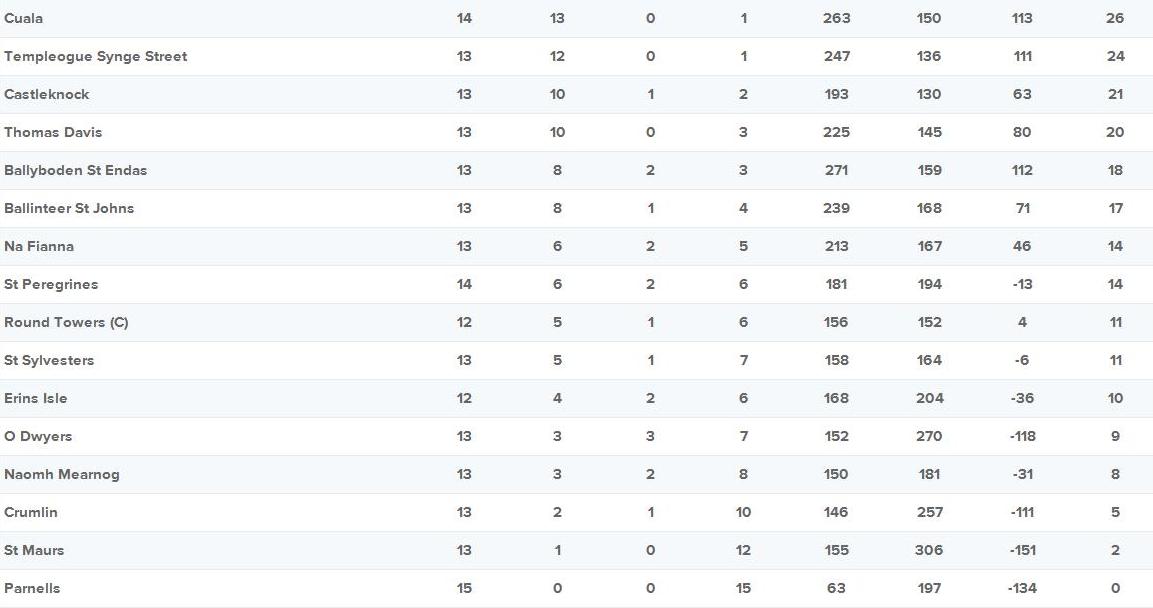