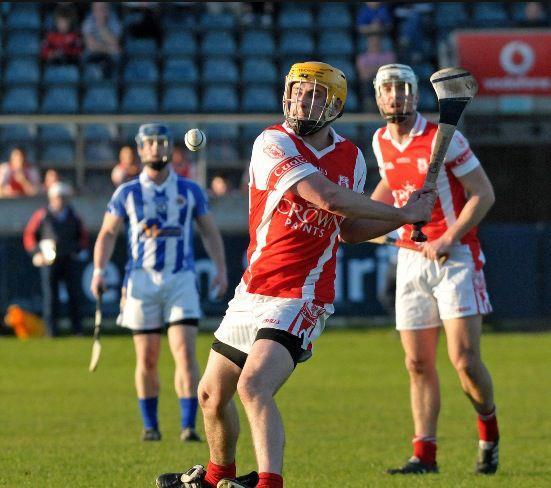 Cuala started brightly and had a 4 point lead within the first ten minutes. Their general movement, the sharpness of their play and their superior fitness was clear from the off and, early on, they had two great opportunities for goals which were both spurned. Vincents shook themselves out of their lethargy, Colm O’Flaherty at full-forward took advantage of two uncommon mistakes in the Cuala defence, and buried the ball in the back of the net.  Game on! Cuala upped their performance again and their excellent ability to find men in open spaces was causing problems for the Vincent’s defence.  The huge puck-outs from keeper Fintan O’Brien succeeded in delivering quality ball to the Cuala inside line. By the 25th minute, the Reds had tagged on three more points and held the Northsiders scoreless. The score was 0-8 to 1-2 and Cuala were threatening to pull away. However, the Marino men hadn’t read the script, and in the last few minutes of the half, it was all Vincents. They increased their intensity and could have had a goal if Hetherton’s 21m drive from a free had found the net.  Half-time score 0-11 to 1-7; Cuala with the 1 point advantage.

Cuala’s half-back line of Barron, Moran and Holden were outstanding from start to finish and, given that all of them are still only 19, it underlies the quality and strength of the talent coming up through the ranks. Sean Moran in particular showed wonderful flashes of skill and composure and dominated the game from centre-back. Hetherton and Connolly, who were so prominent in the corresponding Championship match, were making little impact in the murky conditions with McGrane the best player on show for Vins.

Again Cuala started the better in the second half and registered a goal on 35 minutes following a long-strike from ‘Breezer’ which went all the way to the net. Waldren would later claim an ‘assist’ for un-sighting the Vincent’s keeper! Four more points were registered by the 45th minute from Barron, a wonderful strike way out on the right, Waldren, Keating and the ever-accurate Fitzgerald. The Cuala full-forward line of the Keating brothers on the flanks and Andy Browne in the centre was making life very difficult for their immediate opponents who were finding great difficulty clearing their lines. Late on, when another 21m free was stopped by Fintan O’Brien in nets and when Scott O’Brien upended Hetherton with a wonderful but fair shoulder, the writing was on the wall for the Northsiders. The game finished on a score-line of 1-18 to 1-12.

With 12 players missing today from their Championship panel, Cuala can be well-satisfied with this solid, work-man-like performance of fast hurling and no little skill! It will be difficult job deciding who to drop from this team!

Next up: Naomh Mearnóg in SHL is scheduled for Saturday 7th July in Shankill at 6.30pm, but with Dublin v Clare match in Ennis to be played at the same time, the date and venue may be changed.

Thank You
Scroll to top