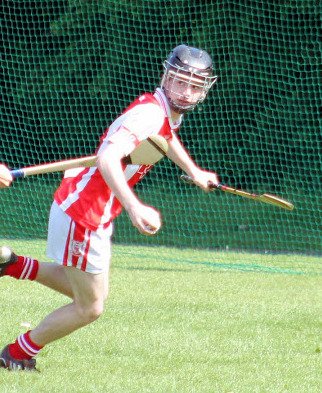 As Cuala’s success in Hurling continues and the three senior teams draw on numbers, pressure mounts on the 4th teams pursuit of the Junior ‘F’ championship. No Problem!

We turned up with a team of competent players and between Ken FitzGerald in goal, and Sean Maas in full forward, the team also featured 9 minors. The youth showed in the opening minutes and it took Cuala longer to settle in to keep in touch -a point behind at the break.

Frees flowed in a tightly reffed match between 2 highly motivated -but play-focussed- teams, and Cuala’s Tiernan Lane capitalised scoring 6, and 3 more from play. As the game continued Neil Kelly’s full backs held the line, with James McCarthy shining against players twice his weight -and age. Daithi O’Murchu unusually in the half forward brought leadership into the middle, illuminated by Andy Power in the half forward position scoring himself and feeding full forward Luke Brennan who now scored in all championship matches.