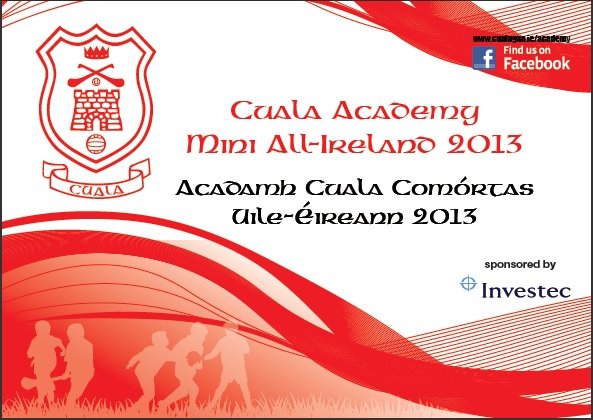 Dates for your diary:

Play on: Week of June 17th, with finals on Saturday 22nd June
Games & Fun for Academy kids The Cuala Academy mini all Ireland is the established end-of-season event for Academy kids. It’s a showcase for the scale of the academy and the enjoyment and skills for the kids who participated throughout the year.

This year, the event takes place on week beginning 17th June with finals on Sat 22rd June. Registration will take place at Academy training on Saturday 11th May, Wednesday 15th May and Saturday 18th May. Registration fee is €20 per child.

Each year/gender will divide into teams and play games against each other. The teams are balanced to allow for maximum enjoyment and participation. Each team is named after a county and each player gets a team t-shirt to wear for the matches.

Saturday Parade, Finals & Fun day (June 22nd) Saturday 22nd is the big final day with a parade through Dalkey to Hyde Park followed by 2 matches for each team.

This is followed by presentations, photographs and a lunch pack for kids/bainisteoirí. Teams & Bainisteoirí (with parents) will parade through Dalkey to the Hyde Park pitches and then a schedule of games will take place. At the end each child gets a trophy and a lunch pack. We will encourage families and supporters to make banners etc to build atmosphere for parade and final matches.

We’ll have over 350 kids playing and another 600 parents/siblings/grandparents in Hyde Park on the Saturday.

Ancillary activities such as simple face painting, t-shirt sales will be encouraged. After the awards the 2004 Boys & Girls are playing some matches and we also have Gaelic for Moms and Gaelic for Dads matches.

Volunteer as a Bainisteoir! – Every parent is welcome to be a Bainisteoir, no experience necessary & it’s great fun – Each team will have 2 or 3 bainisteoir in case a parent can’t make a night

Mini All Ireland for the grown ups!!!

Why should the kids have all the fun? do you have a pair of football boots?  would you like to play gaelic and show the kids how you think it should be done?

You are in luck!!  Cuala brings you Gaelic4Mothers and Gaelic4Dads so there is no reason for anyone to be left on the side line during this event.

Gaelic4Mothers – Coming back to the Mini All Ireland again this year for another round of competitive matches to see which team will walk away with the cup!!  I think anyone who has previously played in this competition will agree that it is great fun and a great way to get to know others.  All you need is a pair of football boots, you do not need any gaelic experience! If you’d like to sign up for this years competition then drop an email to CualaGaelic4Mothers@gmail.com.  Training is on wed evenings at 8.30 in thomastown, new members are always welcome to come along.

Gaelic4Dads – If you’re a Dad, why not bring your boots/runners and win your own bag of crisps? We’re having a short competition after the main MAI – a kickabout with small teams. Even if you haven’t made it to the Friday training (yet), or haven’t played much, don’t worry the standard is not high (except for Gary Widger…) and we’d love to see you. Just wing us an email at CualaGaelic4Dads@gmail.com to put your name down. Fáilte roimh cách!