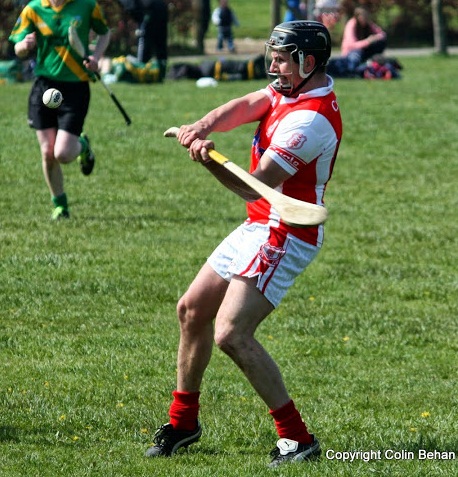 With a personal tally of 4-6, Eoghan Dunne dispelled any chance of an upset as Cuala powered to the top of the League on a balmy afternoon in Edenmore. One of his goals in the second half was simply outstanding and came at a time when St. Monica’s were considering a comeback.

There are some fixtures teams don’t like to play, and away to Monica’s is one of them. A tight, short pitch with grass long on top against a team that shout a lot of the time! Cuala’s game-plan is to open up the forward line and get fast ball to the inside forwards, but the best laid plans of mice and men sometimes fail. The play in the first half was up and down the middle and suited the Monica’s team who had serious players at 6 and 3. John Dillon had clipped over the first following a pass from Simon Cullen. On 5 minutes, Dunne blocked a clearance from his marker, followed the ball out, won the dirty ball and sent a looping shot goal-ward. The keeper missed it and it dropped over his head into the back of the net. Cuala were not firing well and playing well below their normal. Jack Butler, Eoin Dalton, Simon Cullen and John Dillon were the only four playing from in front and attacking the ball. Points from Ed Monaghan, Jack Butler, Alan McCarthy and Simon Cullen put Cuala in the driving seat and with 15 minutes gone, Cuala were up 1-6 t0 0-3. But Monica’s responded. A long delivery was held by the full-forward and he blasted to the net, the same player took a point immediately afterwards and took another goal two minutes later to leave the scores level 1-7 to 2-4. St. Monica’s were visibly rising and players were encouraging each other all over the pitch. Odran Waldren swapped scores with his opposite number and the teams went in at half-time, level 1-8 to 2-5. Cuala had all the hurlers, but there was difficulty seeing them such was the determination of the Northside outfit!

Strong words were said at the break. Cuala had to stop messing about, stand up and drive ball into the full-forward line at every opportunity. Half-forwards had to open the play to the wings and leave gaps for the full forward line to run into. The plan worked. Waldron took his second 5 minutes in. Eddie the Eagle took a ball from Dillon on the left wing, tore past his opposite number and squeezed one over from 35m – lovely hurling! Then it looked as if Eoghan Dunne had had enough of the messing about. Ball was now much more plentiful as the Cuala backs were getting on top. He latched onto another, went straight for goal and there was only going to be one outcome.the score stood at  2-11 to 2-7 mid-way through the second half.  At this point, Cuala’s half forward line was the unlikely mix of Ruari Stanley on the left, Colman O’Drisceoil in the centre and Eoin Dalton on the right, but it seemed to work! The final 10 minutes was the Eoghan Dunne show. His third goal was an astonishing effort full of skill and guile. He took a ball 40m out passed it to himself over the first man, he dummied a pass to his right and ‘sold’ the full back, waltzed through the cover and struck a bullet to the top right hand corner of the net. Fabulous score! He wandered out to hit two huge long-range frees, before killing off any hope for Monica’s with his fourth goal right at the death. Ruari Stanley had the audacity to tackle the full-back who reacted by pushing him over. Dunne closed out his score-card on 4-6 with another free. Final score 4-14 to 3-9.

Footnote: With Castleknock only drawing with Commercials, Cuala are now out on top with full points after 5 games. Castleknock are on 9 points, with Ballinteer and Kilmacud on 8, but crucially, Kilmacud have a game in hand.

Next up: Championship match away to Noamh Fionnbarra in Pope John-Paul II Park on Thursday 5th June 19:30. Next League game is on Sunday 22nd June 15:00 against Realt Dearg away.