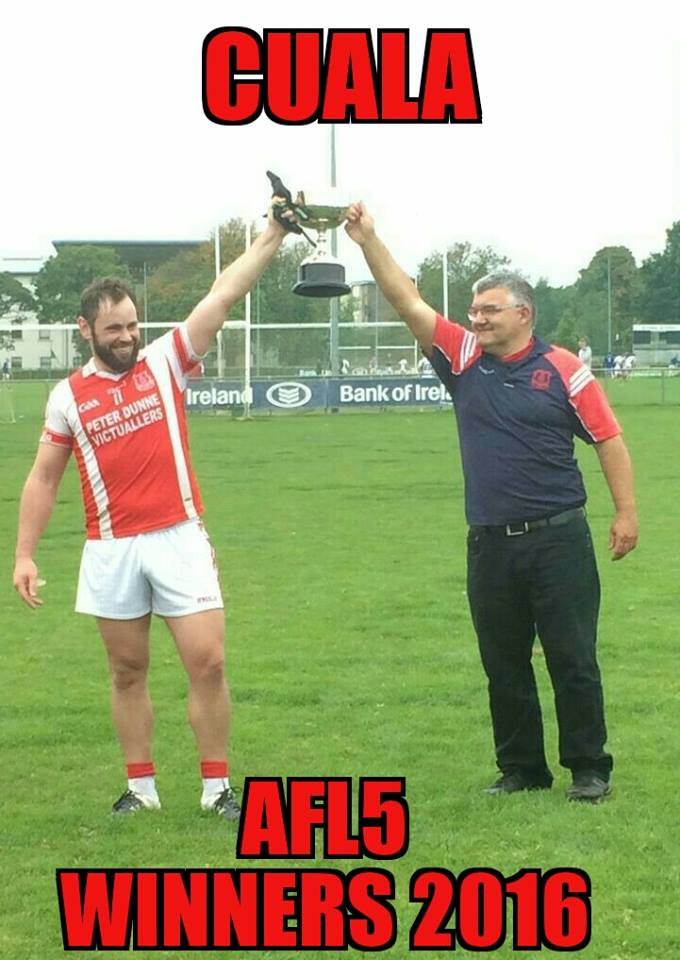 So, it came to this. The journey began back on the dark winter nights of pre-season. Along the way there had been hard-fought victories, plenty of flowing and intelligent football and a strong squad spirit forged in the heat of a very competitive league. The end game played out in Broomfield Park, Malahide as the Cuala 2nd footballers took on St Sylvester’s knowing that victory would see them crowned AFL5 League champions.

From the throw in, the Dalkey lads set about their task with steely determination, getting onto the front foot and dictating the pattern of the game. With Colmán McKenna and Matthew Kiernan dovetailing nicely at midfield and defenders driving forward into Sylvester’s territory at every opportunity, there was a ready supply of ball going into a mobile and effective Cuala forward line.

Gavin Hartnett got the scoreboard moving as he got onto the end of a flowing team move to notch a nice point. This set the tone for the first 30 minutes which saw all six Cuala forwards score in the first half for the second game in succession. Donal Lehmann hit the next score and his intelligent movement and distribution was a crucial factor throughout. Ronan Sweeney embellished his all-action display with a couple of first half points. By the time twenty minutes had passed, Derick Tansey and Gavin Hartnett had both raised white flags as the Cuala lads built up a five point lead. The strong running of Cathal O’Giolláin and Cillian Sheanon was causing the opposition all sorts of problems and they were rewarded for their selfless efforts when each pointed as did the irrepressible Hartnett as the team closed the first half strongly to lead by 0-11 to 0-3 at the break.

Some of the football played in that first half was a joy to watch. Without the ball, the whole team worked hard, denying the opposition time on the ball and winning numerous turnovers. With the ball, the emphasis was on moving the ball at pace when the opportunity arose and retaining possession when the early ball was not on.

The full back line of Dave Sheerin, Enda Kelly and Craig Lawlor defended intelligently and shut out the threat from the Sylvester’s full forward line. Not only that, each of them took the opportunity to drive upfield and complement the attack. Collie Brock and Donal Lane mopped up a lot of ball and together with the feisty Ronan Murdoch formed an imposing half back line.

Determined to win the second half, the team got back on the front foot from the restart and Cillian Sheanon and Donal Lane with a fisted effort from a narrow angle got the scoreboard ticking again. Some officious refereeing then resulted in a very harsh yellow card to Dave Sheerin. A momentary lapse in concentration from the resultant quickly taken free kick resulted in a shock goal for the home side. A point quickly followed and it seemed that a comeback could be on the cards.

This was when this Cuala team really showed their mettle. The defence stood tall as the home attack looked to capitalise on the momentum they had gained. Darragh O‘Reilly was vigilant and decisive in dealing with what came his way in this period and continued to find a red jersey with his kickouts. This helped turn the tide back in Cuala’s favour. Derick Tansey kicked a beauty from a ‘45’ and this was the lift the team needed and they regained the ascendency.

By now, Andy Power had entered the fray for his first outing since sustaining an injury in early summer. His robust and energetic presence was crucial in driving the team forward as Hartnett, Tansey and Sheanon pointed. Luc O’Giolláin and Dan Keating returned from absence and injury and slotted seamlessly into the attack as Cuala quelled Sylvester’s brief comeback threat and reasserted their superiority. The last score of the season came from the boot of Donal Lehmann as Cuala closed out winners by 0-18 to 1-6.
So this fantastic season got the ending it deserved with a league title and promotion to Division 4.

The cup was presented at the end of the game (kudos to the Dublin County Board for having it there) to the league-winning captain, Ronan Sweeney. Fittingly, he asked team supremo, Enda McGowan, to lift the cup with him.

So a major step up beckons next season for this squad which has matured and developed impressively as the season progressed. For now though, there is a league winning season to celebrate. Cuala abú.

Gambling addiction and sport – a free seminar
Scroll to top