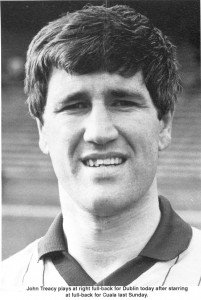 Christy Heffernan, Glenmore, Kilkenny – a huge man, awkward, unpredictable, always going for goals, very accurate, strong, and a really nice guy! Definitely not the person you want to mark as a full-back.He would break a hurl on you and then apologise sincerely.

What is your earliest memory of being coached in Cuala?:

ng beside him with a fag in his mouth.

If you were going to war in the morning what two players would you want by your side? Older age group: PJ Holden – in a row, the red-lad would always be in there no matter what the odds were. When we needed a goal, he was the man to be brought on!

What is the best advice you ever got? 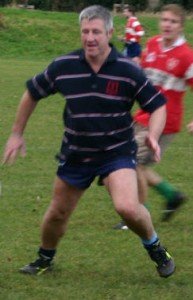 What advice would you give to young players? Always, always be in front; move the ball quickly; make it personal.

Who influenced you most as a player?

Brother Patrick and Brother Ignatius, two De La Salle brothers in National School, I wouldn’t have a love for Gaelic games without their influence.

What is your favourite memory from your career so far?

I like the “so far” bit… I have a number of great sporting memories:

Your aspirations for 2013 in a quote. “I decided to burn lots of calories this year…so I set Dayo on fire”

We’d like to apologise to John for the standard of images in this article, however we were unable to find a picture of John in possession of, or even near a ball of any kind.