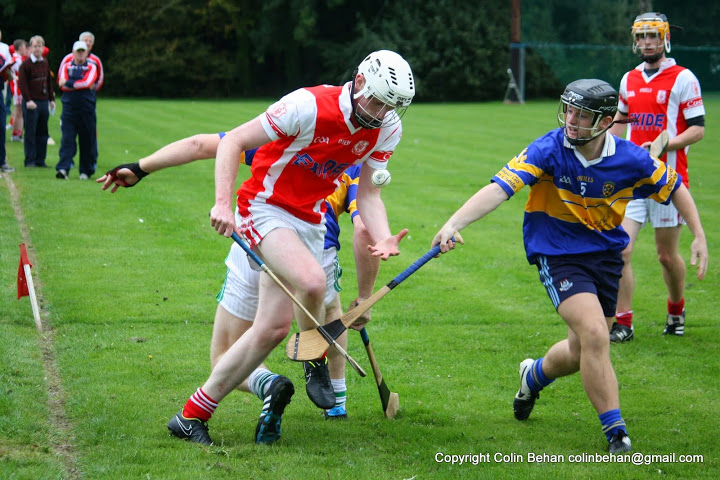 Two of the League’s giants butted heads in ShanganaghPark in perfect playing conditions on Sunday 28th September. Coming into the game both teams were undefeated so something had to give. Cuala had prepared well and hit the ground running. A point from Simon Cullen and an early opportunist goal from Fintán Portéir settled the nerves. Cuala were much the busier and battled for every ball from the start. Castleknock were living on scraps and only converting from the placed ball. Captain O’Drisceoil was magnificent throughout and didn’t make a mistake all day. He came out time after time in front of his full-forward and hit clever passes to players in better positions. Alan McCarthy and Anto Higgins on his flanks attacked every ball and Canice Dowling’s puck-outs were cleverly placed as Castleknock pulled a man back behind their half-backs. Shane O’Brien and Dave Ryan were very industrious around the middle and a long delivery from O’Brien mid-way through the half deceived the ‘knock goalkeeper and went all the way to the net. Cuala led 2-7 to 0-5 at the interval and were well in control all over the pitch. Kevin Killian at centre forward scored three beauties from play and was causing all sorts of problems at centre-forward. Sio Cullen and Ogie Ryan up-front were getting on loads of ball and the deft flick by Ogie over the on-rushing keeper on 45 minutes was one of the goals of the season. Daithí O’Murchú and Ed Monaghan on the flanks were adding to the Castleknock woes and Dylan Kennedy, Rory Doyle and Jack McCarthy were in total control on the half-back line. Sio Cullen had tried to kick three goals and missed, but one deflection off his boot went across the goal and was pulled on by Brian Murphy to seal a fine win for the Reds. Eugene Murphy blew it up on a score-line of 4-10 to 0-9.

Footnote: The only difficulty Cuala faced was deciding on which of the substitutes to get a run. Any of these players would grace the team, and credit must be given to the whole group for the support they gave each other.

Next up: Cuala have to play Ballinteer St. John (4th) and Fingallians (6th) on 12th October to complete the League fixtures