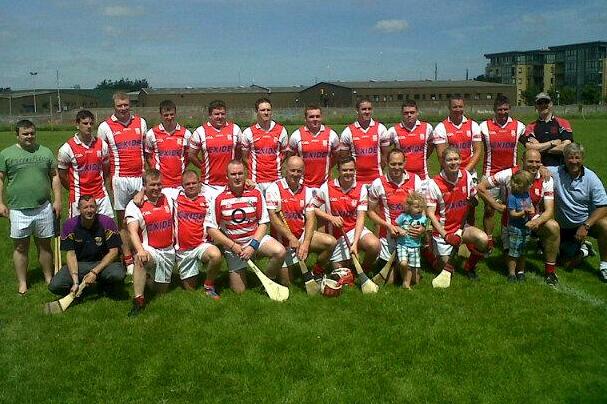 Three goals in the first half of this game paved the way for a comprehensive win over Realt Dearg on a hot, mid-summer’s day in Drimnagh Castle in the sixth round of this league competition. The win leaves the 3rd team hurlers unbeaten so far in all competitions, and is a credit to the efforts these players are putting in and the level of skill they are demonstrating on the field of play. It is an intoxicating mix of older, very experienced players interlaced with youngsters who have pace and fitness and are willing to work. Conor O’Sullivan, coming directly from completing his Leaving Cert on Friday, bagged the first and third goal with typical poacher’s instinct as the ball twice broke to him in front of goal. He didn’t hesitate and pulled the trigger to twice rattle the net. Simon Cullen has scored in every match he has played in to date, and his goal on 6 minutes was from the top drawer. Sio is not the tallest of players, but with his back to goal, he arrived on the 6 yard line at the end of a long Eoghan Dunne delivery to flick the ball over his head into the Realt net. A brilliant score, absolute class, and nothing more than his efforts deserved! Half-time score was 3-5 to 1-3, with youngsters Alan McCarthy & Oisin McCann taking beautiful long-range points, Eoghan Dunne hitting a monster from 80m and Conor Ennis sniping one from close range. Dylan Kennedy worked tirelessly all through the game and really carries the game to the opposition from centre-forward. He puts his heart and soul into every play, and his goal late in the second half was scored with great aplomb. Following a brilliant move involving a pin-point puck out from Canice Dowling to Shane O’Brien, the ball was transferred to Colman O’Drisceoil who, with quick hands, sent Kennedy through the cover with a lovely pass. Kennedy would finish the game on 1-3 from play. Jack Butler and McCarthy hit early points in the second period to continue the momentum, and young Dave Ryan was buzzing all over the mid-field and converted a long-range effort. Colman O’Drisceóil moved outfield and added to the Dearg woe. He made Kennedy’s goal and hit a point himself, but generally used every possession very effectively. Denis Monaghan and John Dillon together with Ray Walsh, thankfully back from an unfortunate injury, had the Realt forwards well shackled and Dunne was sublime in the centre of the defence. A comprehensive victory with still a lot left in the tank. There will be more difficult assignments ahead. One note of caution for the Cuala players: they will have to work on their wide-count. A count of 23 wides in a match is far too extravagant. This will need to be improved on when competing against the better teams in this League, or in the upcoming Championship against Realt Dearg’s first team.

Footnote: Castleknock go to the top of the table on 11 points, Cuala go second on 10 but crucially have a game in hand. Ballinteer, Kilmacud and Whitehall are in hot pursuit. Cuala have still to play all of them!

Next up: Next Championship match is tentatively scheduled for Thursday 5th July 19:30 in ShanganaghPark against Realt Dearg, although there is a request in to change this game.