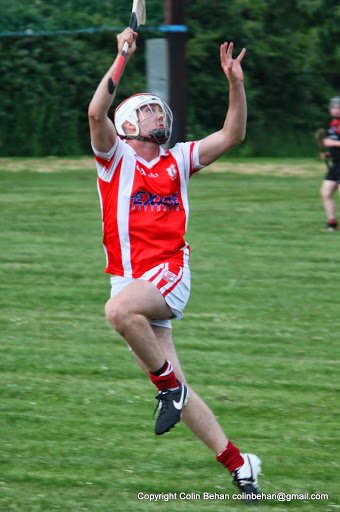 Cuala’s 3rd Team Hurlers qualified for the Quarter-finals of the Junior ‘D’ Championship Group 2 with a work-man-like performance in perfect conditions in MartinSavagePark. With 12 regulars missing, this was always going to be a daunting challenge for this young Cuala side.  It tells something of the character and spirit of this team, that it was only in the final 10 minutes, as St. Oliver Plunketts brought in one or two tidy corner-forwards, when this game slipped away from them.

Cuala didn’t start well and couldn’t find their rhythm early on. They were battling hard, but things didn’t fall right for them. Plunketts had taken two goals in the first 10 minutes. But the machine suddenly clicked into gear and the final 20 minutes of the half was all Cuala! Ogie Ryan, Sio Cullen, Jack McCarthy and Dylan Kennedy all took points as the game was coming back under Cuala’s control. Man-of-the-match, Eoghan Dalton was outstanding at corner-back and himself Colman O’Drisceoil and Cian McCarroll sealed off the full-back line. Canice Dowling’s puck-outs were enormous and giving the inside forwards plentiful supply of ball. But the chances were not being taken. The high wide-count would be rued at the death. On 15 minutes, with a 2 goal deficit, Dowling was called forward to take a 25m free. Oliver Plunketts cancelled all leave and massed everyone on their goal-line. The shot was saved but broke to the only Plunkett’s player out-field. Sheer frustration on the side-line! The move of Fintán Portéir to full-forward did the trick. His physical strength & size and his determination to obstruct the Plunkett’s defence were causing serious problems. With 3 minutes of the half remaining, he took a magnificent goal. He latched onto a pass from Dylan Kennedy, stormed through the cover and hit a thunderous drive to the top left-hand corner of the net. Lar Corbett ‘eat your heart out’. Ryan converted two more frees before the interval as Cuala moved up the gears. Plunketts began to foul to hold the Dalkey attack. Some of the Cuala passing was sumptuous. They had recovered from a 7 point deficit and went into the huddle only 2 down, 1-7 to 2-6, but all the momentum was with them.

Within a minute of the re-start Cuala had clawed back the lead and hit the front for the first time. Ryan, Portéir and Cullen were closing down their direct opponents and giving them no chance to settle. Rory Doyle, Dan Holden and Ed Monaghan were now in control on the half-back line, Jack McCarthy and Brian Murphy were holding the middle. Red-and-White fight and determination and sheer team-spirit were to be seen everywhere. A long drive from McCarthy outfield was let bounce high in front by the Plunkett’s keeper and Ryan pounced and slapped the ball into the net, Cuala up 2-7 to 2-6! Scoring was now nip-and-tuck, point for point. 10 minutes into the half, with Cuala in the ascendency, St. Oliver Plunketts sprung two players off their bench to change the game. The newly positioned right-corner-forward had pace and accuracy. He immediately set to work. His beautifully crafted four points were answered by points from Ryan and Dowling off placed balls. But for Cuala, the effort and the heat of the day was sapping energy. McCarthy put the minimum between the teams and Ryan leveled the match with 8 minutes remaining. But the newly introduced forwards were now finding space and time. Another two points from wide angles and a well worked goal set up by again by the right corner-forward put the game beyond Cuala’s reach with time at a premium. Cuala’s tanks were low and Plunketts went on to score 1-6 to Cuala’s 0-2 in that final 8 minutes. The final score was 2-12 to 3-18.

Next up: The 3rd Team hurlers play a crucial League game against near-neighbours Kilmacud-Crokes in SilverPark on Wednesday 23rd July at 19:15. In the League, Cuala with 14 points are second to Castleknock on 15 points but Cuala have a game in hand. Crokes have the same number of points, and also have that one game in hand.