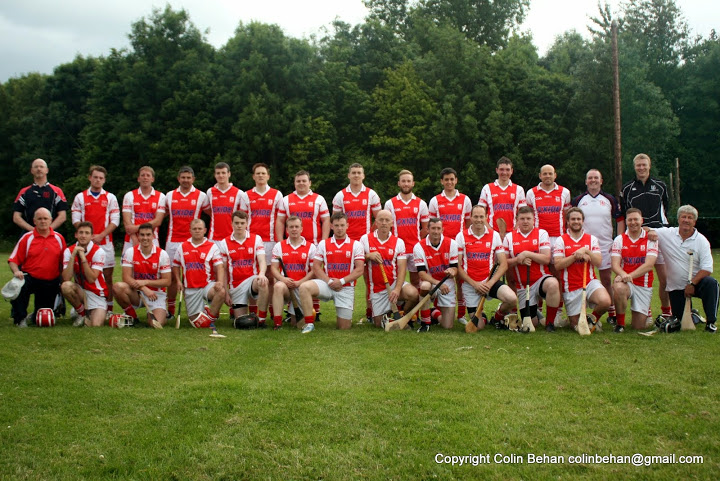 A David versus Goliath story….Cuala’s 3rd Team Hurlers were facing a team that were 4 divisions above them. This Skerries Harps team had already beaten the Cuala 2nd team in the League – it was a daunting prospect! A thunder-storm raged across Shankill 30 minutes before the off and the surface water, together with the freshly cut grass, made the pitch an ice-rink. Ultimately, it might have cost Cuala a place in the Championship semi-final! Four minutes in Cuala had hit two points on the board. Daithí O’Murchú split the posts with a tidy point out on the right, Eoghan Dunne slapped over a free.  Skerries took back one on 5 minutes with a free of their own. Cuala were settling into the game and offering ferocious resistance to their fitter, more illustrious opponents. But Championship nervousness was everywhere. Two wides from dead balls didn’t help. Cuala’s mix of old and young, of veteran experience and raw talent is great to behold, but it’s a difficult mix to get right. A ‘meat-and-drink’ Cuala ball was lost on the half-back line and driven low into the Skerries full-forward line. The sliothar was caught by the tall full-forward. He turned and struck for a point. Colmán O’Drisceóil got a brilliant block on it, but with the poor under-foot conditions, the ground went from under the Cuala-man and he fell. To add insult to injury, the ball popped up nicely into the hand of the full-forward. He wouldn’t screw up his second opportunity. He raced through the gap and buried the ball past Canice Dowling in nets who was helpless to stop the bullet. Cuala began again. Dunne took 2 more points and converted a ’65. Ogie hit a beauty from the left wing, but the 3 point gap was always there. Skerries were fitter and more mobile, particularly around the middle of the field. Players coasted into open country to take points. The Cuala line made changes to try and rectify the situation but the half-time score read 0-6 to 1-7 in favour of the Northsiders.

The Dogs of War began to play in the second half. Every single Cuala player raised their game and the battle raged. Dunne hit three more as now the Skerries team began to wilt under Cuala pressure. There was more ball going into the forwards, but the wide-count was too high. The Skerries backs are a tidy unit and getting through them was never easy. The game was tight and you had to earn every score. Odran Waldron came in and added a neat point from play with his first touch. With 15 minutes to go Cuala were still three down but the pressure was mounting on the Skerries Harps team. With Anthony Higgins, Colman O’Drisceoil, Rory Doyle, Dylan Kennedy, Kevin Killian and Ogie Ryan playing their hearts out, Cuala now took over and attacked the Skerries defence at every opportunity. Jack McCarthy and Brian Murphy were now winning their individual battles around the middle. Frees were conceded and Dunne converted three. Dan Holden took another point from way out on the left, and the three point deficit had crumbled with 11 minutes still to play. Cuala looked like they might push on and take the victory. But the effort had taken its toll. Tired legs were leaving gaps. The cover was loose. The fitter Skerries team were not about to give up. A brilliant individual point from their left half forward from a tight angle on the left put them up by the minimum. Cuala scrambled for a response. With 4 minutes to go, Dan Holden skimmed one over the bar to level matters. It was now anyone’s game. Neither side could bag the winner, so extra time was called. Cuala fought again, and went two up within 4 minutes of the restart, two frees from Dunne. But tired red-shirts were now running on empty and Skerries sensed their opportunity. They took three without reply, and the score on the 10 minute break was Cuala 0-17, Skerries 1-15, only a point between the teams. Again Cuala responded. Another free from Dunne leveled matters, but the dam was leaking. On the 13th minute of extra time disaster struck. A long delivery from out-field looked like it was heading wide, but stalled on the breeze and dropped on  top of the corner-forward. Despite the attention of the defender, he jumped high, met it cleanly and batted the ball to the corner of the net. A goal in such a tight game was always going to be crucial, and Cuala now had nothing in the tank to respond. Cuala bowed out of the 2014 Junior D Championship on a score-line of 0-18 to 2-18, but what a battle!

Next up: 3rd Team play a crucial League game against Whitehall Colmcille on Sunday 17th August in Whitehall.