The Cuala 3rd adult football team got off to a winning start in their J2 Championship in front of a large, but socially distant crowd in Hyde Park on Sunday morning.

Having been drawn in a tough group alongside Ballymun, Na Fianna and Oliver Plunkett’s, a strong start was vital. And that’s exactly what the home side got, as Rory McMahon hit the back of the net inside two minutes.

It was good link up play between Finn Richardson, Donal Lehman and Paul Lehane who eventually played the ball across to McMahon who had acres of space for a close-range finish. 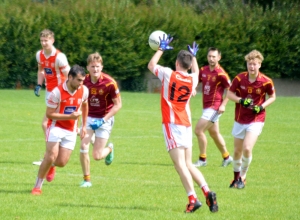 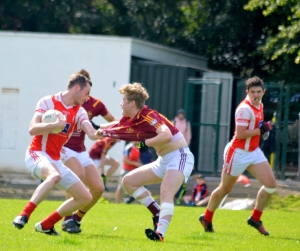 Just two minutes later, McMahon had the opportunity to double his tally. After overturning a Plunkett’s kick out, Cuala moved the ball quickly through the hands before McMahon had his shot saved. With the ball dropping back into McMahon’s hands, the opposition keeper had no option but to bring down the full-forward inside the square. McMahon coolly rolled the ball to the keeper’s left to make it 2-0 to no score.

Plunkett’s quickly switched their kick out plan as Conor Bennett and Luke Twomey were completely dominant in the middle of the park.

Amazingly, the next score of the game was another Cuala goal. This time, Paul Lehane was the architect. After beating his man to the ball, he drew the last defender before rolling the ball into space for the onrushing Finn Richardson. Despite it being his first ever adult football Championship game, Richardson showed incredible composure as he flicked the ball into his hands and rifled the ball into the top corner to make it 3-0 to 0-0 after 10 minutes.

It looked as though Plunkett’s head might start to drop as the back six, led by Collie Brock, was totally dominant in the opening 30 minutes. 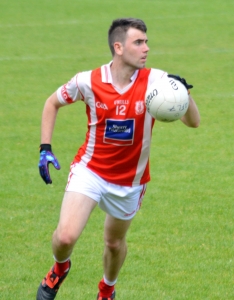 Well taken score by Brian Walsh, Paul Lehane and Rory McMahon gave Cuala a 3-3 to 0-4 lead at half time.

Cuala kicked the first two points of the second half through Rory McMahon and Brian Walsh. Plunkett’s made a number of changes soon after and began eating into the Cuala lead.

A quickfire goal for the visitors with 15 minutes remaining meant Cuala’s lead was cut to just four points, 3-5 to 1-7.

As both sides traded scores, Plunkett’s cut the deficit to three with their second goal of the game with five minutes remaining. Just as the momentum seemed to swinging in their favour, Cuala calmly worked the ball up the field into the opposition 45 and patiently waited for an opening, which was finally pointed by Donal Lehman to give Cuala some breathing room with two minutes to go.

Plunkett’s continued to go for goals but a strong performance from the full back line of Dave Ryan, Paddy Jennings, Sean Finn and then Mark Brophy held strong in the final few minutes after being well marshalled by Cormac Quinn in the Cuala goal.

The visitors could only add a single point in the final few minutes to hand Cuala a three point win.