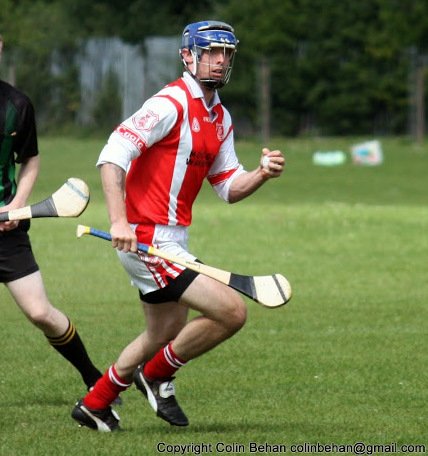 Cuala’s 2nd team hurlers bowed out of the Junior ‘A’ Championship at the semi-final stage in the competition. This was a wonderful achievement for a group of players that were just pulled together at the beginning of the year. With 5 players under 18 on the team, and the majority under 21, it bodes well for the future of Cuala hurling. Cuala led 1-10 to 2-5 at the interval but could not sustain the high intensity effort in the second period. Cuala took the first goal on 15 minutes. Andrew Murphy sent a low ball into the corner and Cillain Sheanan took on his man. The door was closed so he turned back and drove a pass to Shane Murphy who was free on the ’21. He made no mistake. Dara Twomey converted a free immediately afterwards and it looked as if Cuala were on their way, but Boden went up field and converted a goal chance a minute later to keep the gap to just 2 points. The teams were level 1-12 to 2-9 with 20 minutes of the game remaining, but the stronger Ballyboden side pulled away in the final quarter and scored 1-5 to Cuala’s 3 points in that period. Boden’s third goal on 53 minutes was the clincher. A magnificent touch by the corner forward from a long delivery, diverted the ball into the corner of the Cuala net despite the despairing efforts of Stephen Butler. Best on the day for Cuala were Jake Malone, Cian Byrne, Shane Murphy, Martin Cahalan, Scott O’Brien and Eoghan Breathnach.

Next Up: Cuala’s 2nd team hurlers have a League game against Naomh Fionnbarra on Sunday 14th September. They lie mid-table on 6 points after 9 games played.

Dublin win the U16 Arrabawn Tournament for the 1st time in history with the...
Scroll to top