Best wishes to our U14 girls who take part in the 2014 Dublin Camogie Feile this weekend (26th/27th April). The Cuala girls compete in Division 2 and on Saturday play:

All Cuala’s games are on in Thomas Davis’s grounds. The girls hope to go one better than the football Feile last week when they were beaten in the Division 4 final by a last second goal. Please try to get out to support for some of the day. Further details will be on the Cuala website, Facebook and Twitter. 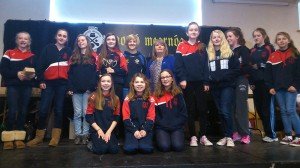 The Cuala 00s at the recent County Board awards ceremony where they collected their 2013 U13 D3 Championship and League winners medals.

As part of their preparation the girls have a special guest coach this Wednesday (23rd April) . Dublin Senior camogie captain Louise O’Hara from Erin’s Isle will take the session. Louise holds a Dublin Senior Championship medal, two junior All-Ireland medals and is one of a very small number of Dublin players to hold an All-Star award. The session takes place in Thomastown between 7pm and 8pm. All spectators welcome.