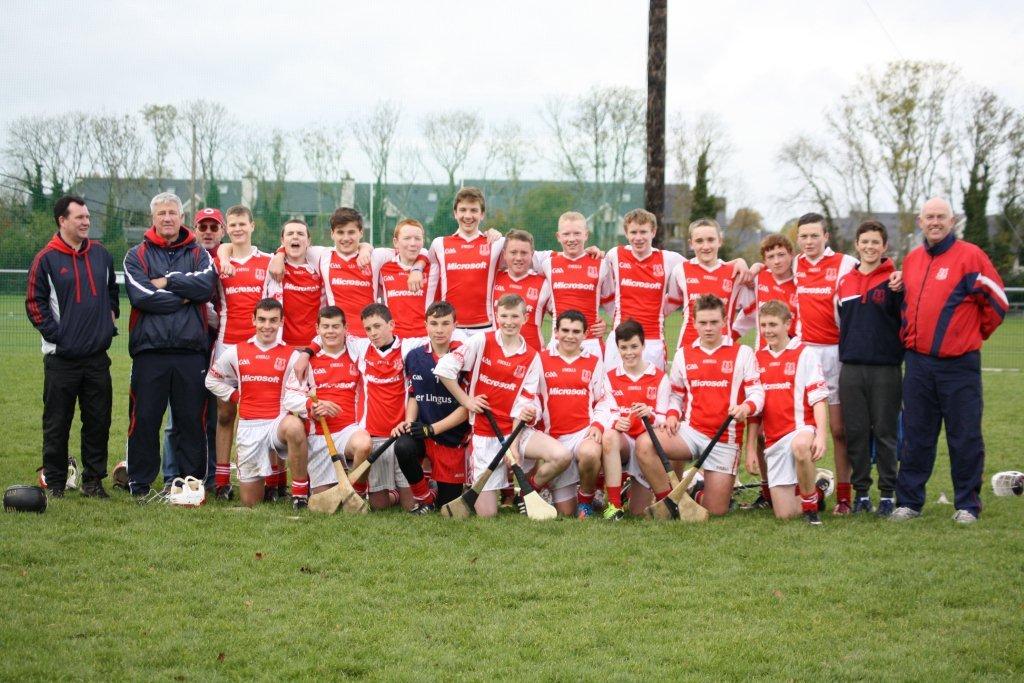 In almost perfect hurling conditions Cuala’s ‘98s travelled down to Kildare to play a tournament in Naas GAA on Saturday 9th November. With no prospect of a competitive match from mid September  to March 2014 in Dublin (a gap of 8 months!) the mentors of this panel had to look elsewhere to give this panel some game time. In a group with Lucan and Piltown of Kilkenny, Cuala opened their account against Lucan. Cuala failed to find their usual intensity and in a very tight game were down by the minimum at the break. Stevie Mc Donnell provided all three points in that first period.  In the second half, a goal for either side was going to prove critical. Cuala did everything but put the ball over the white line. Three gilt-edged chances were not taken as the ball tested the metalwork around the Lucan goal. The goalkeeper was blessed as the balls pinged off the posts around him. Ironically, a long free from 70m by the Lucan goalkeeper deceived everyone and landed in the back of the Cuala net. Final score 0-5 to 1-6.

In the second game Cuala played Piltown from Kilkenny who themselves had lost by the minimum to Lucan. Both teams knew the losers would be going for the early shower! Any suggestion of a luke-warm approach by the Dalkeymen were dispelled in the opening few minutes. Cuala were a team possessed! Within 2 minutes Joe Mahony had registered two points, Fionn O’Tighernaigh and Mark Tracey followed with two more. Stevie Mac took a great goal on 7 minutes and clocked two more points before Tiarnan Lane and O’Tighernaigh took over. The work-man-like performance by all the Cuala players and the quick passing all over the pitch could only be admired. Time and again they looked for the loose man and passed head-high ball into players in dangerous positions. The work-rate was phenomenal and Piltown could hardly get a clean shot out of defence. The neutrals on the line couldn’t understand how this team had lost to Lucan. Stevie Mac and Tiarnan Lane took two more goals before Piltown got a consolation goal on the fifteenth minute. Cuala ran out winners 3-11 to 1-3. The win put Cuala in the Shield final against the home team Naas.

Within two minutes of the start of their third game, Cuala had two in the book from McDonnell and Lane. By 8 minutes Naas had leveled. Cuala were not going to spring out of the traps and get away from this team too easily! Stevie hit a goal and a point and Diarmait Maas took a point to give Cuala the edge with 5 minutes to go in the half. But Naas hadn’t read the script and wouldn’t lie down. With Cuala’s expansive passing and moving game beginning to tire them out, Naas clipped over four unanswered points to leave the teams on parity at the break 1-4 to 0-7. Similar to the Lucan game, the goal when it came was crucial. The second half started. Surprisingly, neither side scored for 10 minutes and both defenses were on top. But Cuala were tiring noticeably and the work rate was down. Some players were driving on empty. On 12 minutes, the only score of the second half arrived. Cuala were trying to clear their lines but the player coming out lost possession and the ball was played across the Cuala goal-mouth and lashed to the back of the net despite the bes efforts of di Felice. The Reds tried everything to recover, but despite their best efforts, they could not get the goal they needed. Final score was 1-4 to 1-7 in favour of the Lilywhites.

Next up: Cuala play in a 7-a-side all-weather tournament over the coming 6 Sundays in Loughlinstown Leisure Complex against teams from Wicklow, Dublin and Kildare.