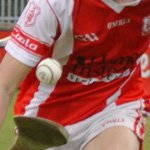 Is there anything harder in Sport than to lose a game that was there for the taking? To fritter away an 11 point lead in any game is frustrating; to do so against St. Brigids, the all-Ireland Féile Champions, is heart-breaking!

The stage was set for a battle!  The Cuala U15 hurlers were taking on the might of the 2012 all-Ireland Féile Champions on a dry, bright afternoon in Hyde Park.  Both teams are vying to be crowned Division 1 League Champions. Brigids won the toss and elected to play against the breeze and up the hill. From the very first whistle, the attitude, bravery and commitment from this great Cuala team was a joy to behold. They got stuck into their much-vaunted opponents and never once allowed them settle. Throughout the whole first half, they were dominant in almost every position on the pitch. They hooked, blocked and harried their direct opponents and won most of the 50:50 balls. Within two minutes, points from O’Treasaigh (who was the outstanding player on the pitch) and Maas (now back to his best) were on the board. On five minutes Mahony latched onto a loose ball in front of goal and raised the first of his three green flags. Brigids couldn’t believe the battle they were in as wave after wave of Cuala attack rained ball into their defence.   All Brigids could show for their efforts in the first have were two pointed frees. McCarthy, Myers and O’Treasaigh were taking scores from every angle. Free-taker Murphy clipped over two frees (following good work from O’Treasaigh and O’Floinn), but one had to be deflected over as he audaciously went for the top corner of the net. Halftime couldn’t come quickly enough for the Blanchardstown management who must surely have been frustrated by the one-sided contest. Hartnett and McCarthy were winning ball around the middle and the Cuala half-back line were hardly tested. Anything that did get through was easily dealt with by the imperious Coronella and his two henchmen, Lane and McMahon. De Felice in nets was hardly used. Halftime was called and Cuala were leading 2-7 to 0-2.

During the interval Cuala were reminded that their opponents were all-Ireland Féile Champions and they weren’t going to lie down easily. Cuala now had to face a stiffening breeze and were playing up the hill. They key was to hold Brigids for the first 10 minutes and to prevent them scoring a goal. Within two minutes of the re-start, Mahony was at it again. He made a nuisance of himself around the goal and pulled on another loose ball to the net. Cuala were now 2-7 to 0-2 to the good.

What happened next was an astonishing six minutes that can only happen in this wonderful game of hurling. Cuala began to tire and to lose their grip around the middle and balls began to rain over the half-back line directly onto the full-backs. In that six minutes, four unfortunate errors by the Cuala rear-guard were pounced on by the Brigids attack and resulted in four goals. You could see the life flowing back into the Brigids players! Two further converted frees and Brigids were ahead by 3…what a turnaround! A team previously  in disarray suddenly saw a ray of hope. They didn’t give up – the true mark of Champions.  Yet, as they pressed forward ominously,  Cuala’s response was magnificent. Mahony was fed by O’Treasaigh and stopped the rot by completing his hat-trick with 15 to go.  Quinn and Wylde came into the fray and added strength in the forward line.

But those four goals had knocked the stuffing out of Cuala. They re-grouped and tried to move up-field to regain the initiative. But Brigids now had the ‘bit between their teeth’ and showed their real pedigree. Their centre-back won a tight ball, soloed the length of the pitch and converted the point of the match.  Three more Brigid’s frees the full time tally saw Cuala beaten 3-7 to 4-9.

But what a tremendous performance! Johnny McGurk, the legendary Dublin & Craobh Ciarán mid-fielder praised the spirit, energy and never-say-die-attitude of the Cuala 15’s and said commended their style of play.

Footnote: It’s difficult to come up from Division 2 and perform against the best in Dublin, never mind the best in Ireland. The heroics and determination they show will stand them in good stead in the battles to come. They will put this result behind them and will move on, but they will learn. These guys are passionate about their hurling; to them it is more than a pastime or a hobby, for them it’s a way of life. Over the next few days they will gather together in groups of four and five, hurls in hand, to discuss and analyse the game, to plan what they will do for the next one, and to hone their hurling skills. That’s why they will make it onto the Dublin Minor and Senior teams of the future.