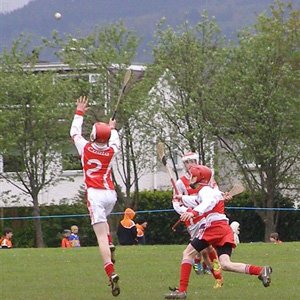 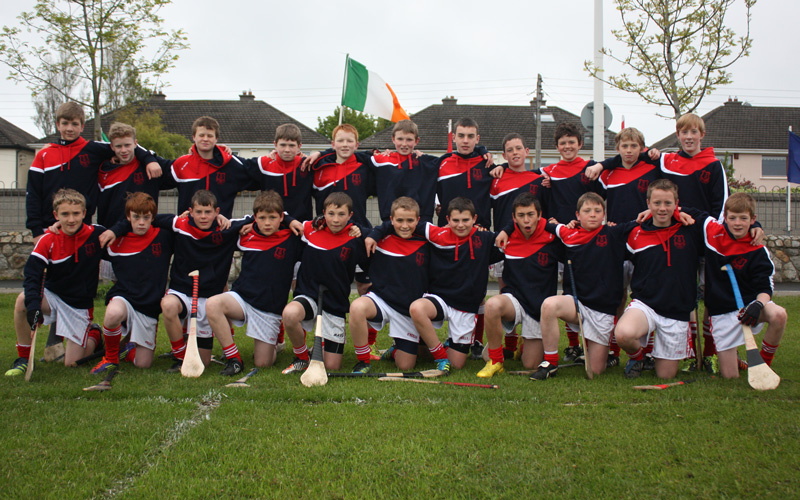 All-Ireland Finals don’t come any better than Cuala’s hosting of the 2012 Division 2 Hurling Féile on Saturday, May 19. The Thomastown ground was resplendent with flags and there was a hustle-and-bustle of activity around the clubhouse as the Cuala faithful arrived with provisions for the day. Inside there were enough sandwiches & cakes to feed an army and the pitches were marked and lined to perfection. Damian McKeown and his team of helpers must have been busy since dawn putting the final touches to this wonderful event.

Cuala joined Ballinteer, Castleknock and Division 1 side Whitehall in their group matches. To open the proceedings, all four panels paraded behind the ‘lone piper’ in what was a magnificent spectacle. It made the hair stand up on the back of your neck! Any neutral passerby would have thought that an inter-county contest was about to commence.

Instead, an even finer display of hurling was set to unfold. In the first round of matches, Whitehall had Castleknock and Cuala took on Ballinteer.

From the throw-in Cuala showed a fierce determination, though scores were hard to come by. Ballinteer went up by two points early on before Emmet Murphy knocked over a point to settle the home side and the huge support on the line. What happened next was something fit for an all-Ireland Final. Daniel Johnson won a ball in midfield and gave a wonderful pass into Diarmait Maas. Diarmait turned for goal but saw an opportunity. He hit a high ball towards goal and Emmet Murphy coming in from the right pulled on it into the top corner of the net. What a goal! The goalie had no chance. A minute later Mikey Wylde, not to be outdone, notched another goal pulling on a loose ground ball. Two goals in the space of a couple of minutes knocked the wind out of the sails of the team in Orange & Black. Young Murphy sent over a free to end the first half.

The second half proved to be a defensive battle, with the fullback line of Rory McMahon, Tiarnan Lane and Brian Coronella forming an almost impenetrable wall in front of keeper Ryan De Felice. Brian’s high fielding and long clearances in particular caught the eye. In the end Cuala ran out winners on a score-line of 2-5 to 0-5.

Next up was Castleknock. The visitors started brightly in the second game, their physical size causing problems for the Dalkey outfit. But the Northsiders were soon eclipsed by the solid Cuala half-back line of Thomas McCarthy, Fionn O’Drisceóil and Oisin Marray. On the half-forward line, Cathal O’Floinn, Big Joe Mahony and Mickey Wylde were getting to grips with their bigger opponents, but it was the ‘engine’ in the middle of the field that was making things happen. Diarmait and Dan were ‘bossing’ midfield and were driving lots of ball into the potent Cuala attack. Greg Sheehan was being marked by a giant with a close resemblance to Galway’s Joe Canning! A trio of 1st half goals shared between Fionn Myers and Tiarnan Lane put a real stamp on the match for Cuala, so that the lads needed only to stick to the game plan in the 2nd half. Fionn scored a wonderful 2.2 from play and Cathal’s dogged determination netted him 1.1 as Cuala opened up in attack. Unfortunately Cuala lost Diarmait and Oisin to injury. When the final whistle sounded, Cuala had qualified for the semis on a score-line of 4-5 to 2-3.

Whitehall had also convincingly won their first two matches, so the head-to-head would decide who topped the group and who would have to travel to Martin Savage Park to face the winners of Group A.  The game started at a tremendous pace and with Cuala missing two key players due to earlier knocks, every member of the squad was called upon to do their duty! Cometh the hour, cometh the man…Stephen McDonnell stepped up and slotted home a 12th-minute goal to mark his emergence as a scoring threat. This goal combined with another from goal-poacher-in-chief Emmet Murphy and a sweet point from Mikey Wylde, meant Cuala were up by four going into the break. But the Dalkey outfit had paid a very high price for that lead! Centre-back Fionn O’Drisceoil who was in outstanding form, and Mark O’Treasaigh the ‘reds’ sharp-shooting full-forward, were now limping off to join the other ‘walking wounded’ on the side-line.

Despite this bad luck, it was all to play for in the final 20 minutes. In the forward line Greg Sheehan, Conor Newman and Jack Twomey introduced themselves to the Whitehall defenders and Joseph Mahony kept the Dublin centre-back very quiet indeed. But even with the valiant contributions of U13 stalwarts Diarmaid O’Floinn, Jack Twomey and Andrew Tobin, the loss of key players to injury would prove Cuala’s undoing. The excitement was now at fever pitch. The Whitehall players were fighting for their lives and came in waves at the Cuala defenders. But Cuala were holding out and broke down field a number of times to clip over 3 points of their own. The final few minutes were as exciting as you’d find on any pitch anywhere, but in the end Whitehall’s strength told and they ran out winners by the minimum, 1-8 to 2-4. The battle again took its toll – Conor Newman was the latest casualty to be called ashore with an injury.

The weary ‘Band-of-Brothers’ picked themselves up, collected their belongings, dragged the ‘walking-wounded’ into cars, and headed out the M50 towards the Navan Road. Faughs were waiting to entertain them as winners of the Group A; Whitehall stayed back in Thomastown to entertain Sylvesters.

Cuala started poorly. Injuries meant that there were nearly more players on the line than on the pitch! Faughs ran into a punishing lead and converted two chances to the net in the first 5 minutes as Cuala were knocked back on their heels. At half-time the game appeared to be over as Faughs held what looked like an unassailable lead on a score-line of 3-4 to 0-2. Their managers were packing up their bags and buying the oranges for their final in Parnell Park at that stage – but our Cuala Brothers had different ideas!

Taking the pitch for the second half, Cuala dragged Fionn O’Drisceoil and Mark O’Treasaigh off the line. Diarmait Maas, with a nail missing off his thumb, was fighting like a tiger. He collected every ball sent his way, and cleverly fed the Cuala forward line. Dan and Big Joe were creating havoc in the mid-field ‘diamond’, but it was the magic of O’Drisceoil that was turning the tide for Cuala. He was simply outstanding in the centre-back position. He won ball after ball in a glorious 10 minute period and snuffed out any Faughs attack. The ‘red’ forwards were now in control and gave intelligent passes to open up the defense. In the first five minutes of the second period, Fionn Myers and ‘man-of-the-match’ Stevie McDonnell netted three goals between them and it was a very different contest now. Faughs were now in serious trouble and they knew the game was getting away from them – fast! They pulled players back to defend their now slender 2pt margin, but another wonder-strike from Mark with five minutes to go sent the Cuala supporters into ecstacy. Now only the minimum behind, the Cuala effort was outstanding to watch, with players laying body and soul on the line for every ball. Thanks to fierce defending from Cuala’s fullback line, Faugh’s attack, so potent in the first half, seemed to vanish. But the effort again took its toll. O’Drisceoil could no longer continue and Murphy was carried off with a serious knee injury to join him on the line. Despite seven of their key players missing, still Cuala drove forward. On the one occasion Faughs went on the attack, Ryan de Felice between the sticks capped a magnificent Féile with an outstanding save from point blank range. This class performance would get him a call-up to the Dublin Development Squad. The ball flew into the air and was pulled on by Rory McMahon to safety. Everyone in red-and-white on the side-line could breath again! With a minute gone of injury time, Mickey Wylde, obeying half-time instructions, drove straight at the heart of the Faughs defence, and shot a low ball goal-ward. The sliothar bounced off the turf but strayed 6” past the right-hand upright – wide! The clock simply ran out for Cuala in the end. Scoring just a single point in the second half, Faughs took the honours on a scoreline of 3-5 to 3-3, but knew they had been in a tremendous battle. What a game! On the down-side, I don’t think we will ever hear the end of Stevie McDonell’s 2.1!

Those involved with Sport at any level, know how cruel a master Sport can be! Cuala’s Hurling Féile team came within a few minutes and couple of points of getting to the U14 Championship Final, but injuries to seven key players proved to be too heavy a burden to carry at the end of the day.

The record will show that two Division 1 teams, Whitehall and Faughs, contested the Division 2 Féile Final, with Whitehall emerging victorious.

What about Cuala? Words like ‘heroic’, ‘courageous’ and ‘passionate’ hardly do justice to the effort this group of 22 demonstrated for pride in the Jersey, pride in the Parish and pride in the Club.

For the record, the ‘Band of Brothers’ were: 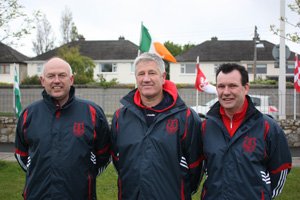 Thanks to Damian and his highly efficient team for organising the event in Thomastown; no club in Dublin runs a Féile better than Cuala!

Thanks to mentors and players from the 1998s.

Thanks to parents & relations for their support and encouragement.

A special salute to physio Erica Walsh for dealing with our injured warriors,

Thanks to our club members for their support…

But most of all, to each and every player who put their bodies on the line for the cause of Cuala…to all of you we say: Thank You!